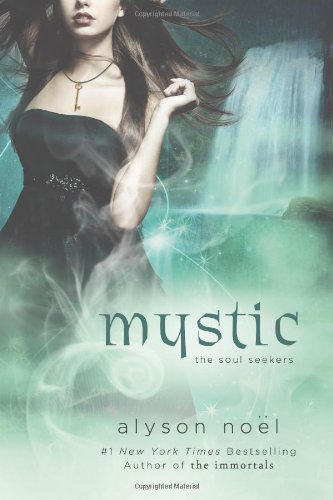 Mystic
by Alyson Noel
Age Range - 12 and up
Genre - Mystery

Mystic, being the third book in the Soul Seeker series, starts out with the ongoing problems of Cade (Dace's evil twin, literally) attempting to take over the Middle World and Lower World so that he may wreak havoc until he controls everything and can break into the Upper World as well. Cade is power hungry and egotistical. While Dace having just lost his soul in an attempt to save Daire, only to have her taken to the Upper World, is lost in the vast darkness of the Lower World. Daire, however, has to find her way out of the Upper World so that she can save Dace and show her friends and family that she is indeed alive.

This is all part of Daire's journey as a Seeker. She is still technically in training, but she is quickly learning that she is going to have to be a fast learner when everything that she loves hangs in the balance.

Mystic is my favorite (so far) in the Soul Seeker series. Alyson Noel does a spectacular job of making the complicated journey of a Seeker easy to understand. (When I try to explain what the series is about.. Well, that's not so easy.)

Alyson Noel has a way of making mystical worlds become real in the reader’s mind, and while she does not disappoint in Mystic by “creating” the different dimensions (Middle, Upper, and Lower Worlds), she also makes less “enchanting” places seem quite real as well. She describes the land of Enchantment, New Mexico amazingly; so that you can picture the crumbling adobes and even how the town has been darkly influenced by the evil Richters.

The characters also seemed much more developed then when the Soul Seeker series first started. Daire has grown in her training with her grandmother, Paloma has become a better seeker and now understands the seriousness of the task at hand. Dace has also become a much deeper character. Instead of his world being purely shades of black and white as it used to be, he starts to see that sometimes there can be a shade of gray in between. Xotchl, Daire’s best friend, is a very interesting character. With Xotchl being blind, yet able to see energy, anything in her perspective was a little harder to picture but her character is definitely intriguing. Then, of course, there's the romance. Daire and Dace are perfect together. They're definitely my two favorite characters, and the "love padlock" is now on my list of things to do.

In short, all of the characters are believable, even the otherworldly ones.

Mystic is told mostly from Daire’s perspective, but there are certain chapters in Dace and Xotichl’s (Daire’s best friend) perspectives. I liked Daire’s perspective the most. As the main character, her thoughts are the ones that kept my attention the most. Since Xotichl is blind but sees the “energy” of things it was more difficult to imagine some of the things she sees, so I wasn’t as captivated by her perspective. It was also nice to have some in Dace’s perspective to see how deep his devotion for Daire goes.

I also like this series a lot more than Alyson Noel’s Evermore series. I started the series and fell in love with the first book but then the series had grown so sad and depressing by the second book that I never finished it. Mystic holds all of the happiness and romance that I loved in Evermore without being so depressing that I can’t stand it. (In other words, much better.)

It’s hard to say whether or not I liked the ending of Mystic due to the fact that it’s the third book in a series, and there’s going to be four. So Daire’s journey as a Seeker will continue in the next book called Horizon which comes out in November. The ending was sad, but still a good ending all the same.

I would recommend this book to anyone who enjoys a good suspenseful romance. It is a great book with romance, action, & some Native American myths thrown in.

Mystic will be on sale in about a month! ;)

Read more reviews by this Litpick Book Reviewer: MickeyBeth
Recommend this book and review to your friends on Facebook