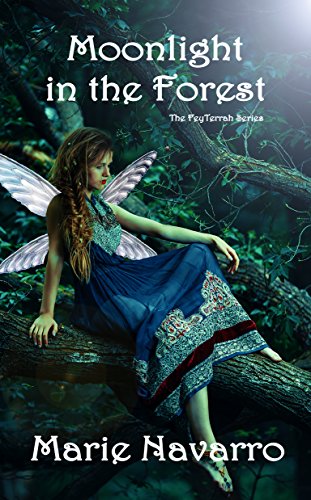 Moonlight in the Forest is a continuation of the FeyTerrah series with a few new twists. The ring bearers have been found, and with them, true friends of the fey as well. Lily and Dreamer are now given the task of gathering all the rules of FeyTerrah to decide on how to continue. The passage between the border of FeyTerrah and Earth has been extremely restricted, but Lily and Dreamer intend to change that. With true friends to the fey and elves in Earth, it might be a time for second chances.

The people of FeyTerrah left Earth because of the growing hatred and violence towards them, but it's a different time and people are more civilized since they last came to Earth. A lot more people from Earth know their secret than they thought. Maybe it's time to start forging new connections with Earth? Maybe even have some diplomats living there? Lily and Dreamer are getting married!? What will happen in this exciting thriller? You need to read it to find out!

Marie Navarro wrote a wonderful book that's chock-full of magic and mystical folk like the fey and the elves. This book has been even more enjoyable than the past books in the series. It feels as if Marie is in her element here, fully immersing herself in the world of FeyTerrah to really bring it to life. With every new book, the series gets more and more complex. At first, the plot of the series seemed simple, but every book has added another layer of intricacy into the mix. It's not a simple stay-or-go choice anymore.

The characters have grown from the first time we've seen them. Lily has grown into the role of being a fairy and can't believe it's only been a few weeks since she first found out about her heritage. Will now faces a struggle of continuing with his aspirations of being a doctor or leaving Earth behind and marrying the love of his life, Dexy.

I am loving the FeyTerrah series and I can't wait to see where it goes from here! If you enjoy reading books like the Chronicles of Narnia by C. S. Lewis or Five Kingdoms by Brandon Mull, you would probably enjoy reading this series. I would recommend this book for ages 10 and up.

There is a death, but it wasn't very vivid.
KEYWORDS