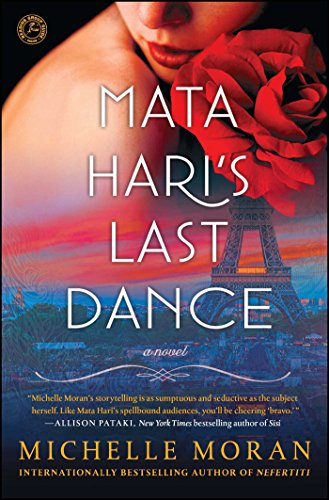 Spies have a reputation for being glamorous, intelligent people that always have a clever line and a speedy getaway. The life of World War I spy Mata Hari meets all the qualifications — except the latter. From a cold cell in Paris, she tells readers her uniquely tragic story.

Mata Hari’s life began with a less exotic name. Margaretha Geertruida Zelle suffered at the hands of an abusive father and then a blatantly unfaithful husband. She escapes, but is forced to leave her young daughter behind in Java.

Europe treats Mata Hari well at first. Her reinvention as an exotic dancer with a name that means "Eye of the Dawn" leads to a new life, full of jewels and opulence she’s never had before. But Mata Hari’s famous shows are not enough for her. As she becomes more popular, her clientele gets closer to the inner circle of men who are dictating the French terms for the Great War. Lovers, betrayals, and seductions are common threads in her life as both a spy and a dancer. When a shocking accusation cuts her career short, Mata Hari faces deathly consequences.

As the story spirals towards its inevitable conclusion, readers will turn the pages even faster to uncover the truth about Mata Hari’s espionage. Readers looking for a real-life 007 should pick up Mata Hari’s Last Dance and get swept up into a salacious drama that defies all expectations.

I first learned about the incredible life of Mata Hari from an episode of The Young Indiana Jone Chronicles. I was captivated by her dramatic life, but like many women in history, her story has been lost in the footnotes of time. Luckily, Michelle Moran sheds some light on this fascinating woman in her latest biographical novel, Mata Hari’s Last Dance.

The story is told in the first person. I usually associate this point of view with young adult novels, but it works well here. It feels intimate and even secretive — perfect for the spy genre.

Having just started college, I read Mata Hari’s Last Dance in short spurts — five pages before American Religion, a chapter between American Empire and Women’s Health, half a page before I remembered an essay due that night. Luckily, Moran’s writing is smooth enough that I was always able to pick the story right back up without confusion.

Mata Hari is a complex character. She’s sexually liberated, morally ambiguous, and ruthlessly ambitious. For a woman in the 1910s, this was a shocking upheaval of social norms. I was reminded of Scarlett O’Hara, the heroine of Gone with the Wind, because of her total disregard for the status quo. I happen to adore Scarlett, million flaws and all, but characters like her aren’t always very popular. While Mata Hari’s tragic past will win sympathy from readers, her often questionable actions later in life are sure to provoke debate at book clubs.

Even readers who have mixed feelings about Mata Hari’s are sure to be touched by her final words. There is not a direct arrow that point to her guilt or innocence, so there is a lot to think about after finishing the book.

I would recommend that readers who are truly devoted to history pick up an actual biography Mata Hari along with the novel. Moran’s take is snappy and exciting, but it is lacking in historical depth. I was left with questions about her early life and actual spy work, and the supporting characters weren’t fully fleshed out. The benefit of this is that the book isn’t very long, so readers who don’t want to commit to a 500-page tome may enjoy this brevity.

A quick note for teachers and parents: Mata Hari’s Last Dance is definitely racier than Moran’s previous novels. It’s nothing like Philippa Gregory’s books, and it is a book about an exotic dancer, after all — but I’d emphasize that readers need to be mature enough to understand the significance of sexuality in a greater context.

Rebel Queen is still my favorite Moran book, but I greatly enjoyed Mata Hari’s Last Dance. While I do wish that she had gone into more historical depth, it is still an entertaining, dramatic read about a bold woman who deserves more time in the spotlight.