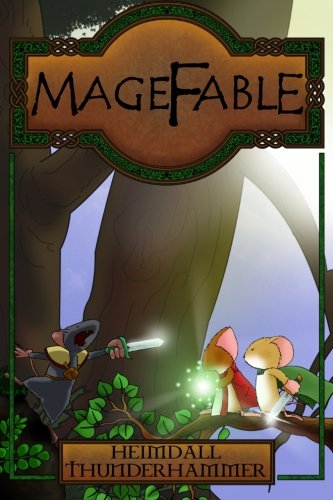 Magefable is a book about two friends, a mouse and a porcupine, named Clove and Herod. Their quest is for Clove to gain the powers of a geomancer.  If she gains the powers of a geomancer, she can combat the villain of the story named Sinvicious, an evil lion king, who wants to take over the world.  The reason he is so feared is because everyone believes he is a necromancer. The only thing that can counter necromancy is geomancy, so Clove’s goal is to become a geomancer to stop him. Sinvicious has learned that Clove is trying to stop him, and has sent a horde of rats to stop them. Will Clove become a geomancer and stop Sinvicious?  Find out in this exciting series!

Magefable was a very exciting, adventurous book.  I really liked it.  It had lots and lots of twists that made it surprising.  I liked that the author made it funny while at the same time not something unbelievably unrealistic.  I also felt that the characters were relatable and very well developed.  My favorite character was Durbin.  I liked him because he was a brave young mouse who dreamed of going on an adventure and living up to the name of his father, Marcus the Brigand.  I also liked Clove, who knew that the one who made this quest before her was unsuccessful, and yet still is determined to try.  Something on the editor's part that I felt left something to be desired was that some of the grammar, spelling, and punctuation still should be corrected.  I would recommend this fantasy book to ages 10 through 14 because there are some big words, lots of fighting, and some killing.   I can’t wait to read the next book in the series.

There is fighting,there is some killing, and bloodshed.
KEYWORDS