The Fire Wish review by alison_S 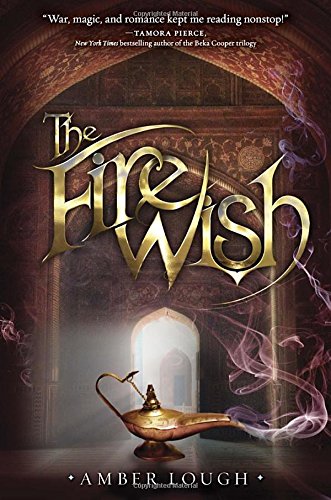 When Najwa, a spy for the subterranean Jinni race, transports to the human world, she encounters Princess Zayele, who's all too eager to escape her arranged marriage to the caliph's son Kamal. Before Najwa can disguise herself, however, Zayele captures the frantic Jinni and wishes to return home. But instead of returning to her hometown of Zab, Zayele materializes in the undergroud Jinni cavern, while Najwa remains trapped in the human world. As each girl struggles to assume the other's life, they unearth decades-old secrets surrounding the Human-Jinni War and confront their true identities. But can our two protagonists conquer the traitor lurking within the palace walls?

At first glance, The Fire Wish struck me as little more than the conventional tale of two comically different characters swapping lives. Luckily for me, however, I couldn't have been more wrong; though Zayele and Najwa's trading places unleashes the bulk of our protagonists' problems, Lough's thoughtful, imaginative backstory intensifies this deceivingly simple plot. Though, by alternating between Zayele and Najwa's viewpoints, Lough evokes sympathy for two characters on opposite sides of a decade-long war, she also bogs down the novel's initial chapters. That being said, the book's slow start allowed time for richly developed characters and a vibrant setting. In creating the Jinn's world, Lough blends fantasy and Middle-Eastern culture with finesse. The Fire Wish ends perfectly, treating readers to a conclusion as inevitable as it is unpredictable, though the novel's decidedly optimistic endnote, in some readers' minds, at least, may compromise its authenticity.

Mild violence (though deaths occur, the gore is by no means excessive).
KEYWORDS