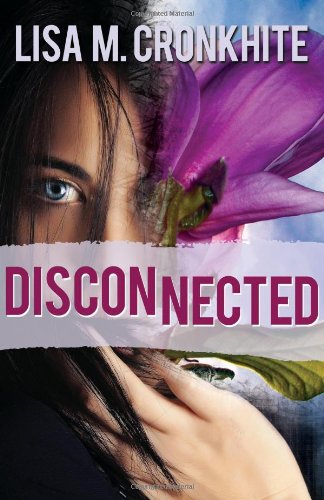 Disconnected
by Lisa Cronkhite
Age Range - 12 and up
Genre - Mystery

In Disconnected, orphaned protagonist Milly struggles to unearth what really happened to her parents, Frank and Violet Norris, as well as discover the secrets of her own identity, all while battling Dissociative Identity Disorder (DID). After Grandpa George's house burns down, Milly and her grandfather relocate to her Aunt Rachel's sprawling Victorian estate, complete with secret passageways, a mysterious tombstone, and eerie cries in the attic. Haunted by visions of a black-haired, barefoot girl, not to mention an onslaught of otherworldly magnolia petals, Milly stumbles onto a slew of family secrets. Since Milly's birth, Aunt Rachel and Uncle George have done whatever was necessary to guard the Norris family secrets. Will Milly ever unearth what really happened to her parents, or will her mental disorder blind her to the truth of her own identity?

First of all, I'd like to preface my review by expressing my sincere admiration for those who, like Ms. Cronkhite, have overcome a mental disorder. The opinions expressed in this review reflect my impression of Milly, not my opinion of those who suffer depression, schizophrenia, or Dissociative Identity Disorder.

Though peppered by the occasional snippet of breathtaking imagery, Disconnected relies too heavily on clichés when describing setting. Furthermore, although Disconnected centers primarily, around Milly's battle with DID, I struggled to connect with the novel's protagonist. Although I could relate to some of Milly's vulnerabilities, I feel as though Cronkhite devoted too much of the book to Milly's challenges, while largely ignoring Milly's strengths. Additionally, even though Milly manages to, in the course of her book, suppress some of her DID symptoms, Cronkhite seems to gloss over this portion of our protagonist's emotional journey. Because Disconnected focused almost exclusively on Milly's weaknesses, I regarded her love interest's near-instantaneous devotion with a touch of skepticism. That being said, what their relationship lacks in believability it makes up for in heartwarming adorableness. Although, for the most part, Disconnected does benefit from fairly brisk pacing, Cronkhite tries to cram the bulk of her book's climax into a few pages of heartfelt reveals. Had Milly discovered her family secrets gradually, rather than in a final, emotionally-saturated rush of waterworks, I would've better appreciated Disconnected's impressively complex web of clues. Lastly, I wish Milly had played a more active role in the novel's plot; rather than unravel the Norris family mystery herself, Milly simply….asks her aunt.

Disconnected held my interest but failed to wow me; Cronkhite's novel offers readers an engaging— albeit poorly executed—  mystery, a too-good-to-be-true romance, and a heartfelt portrait of mental disorders. So if you're hankering for teenage poignancy laced with suspense, Disconnected's probably worth a read. Otherwise, I advise you to look elsewhere for your beach reading.