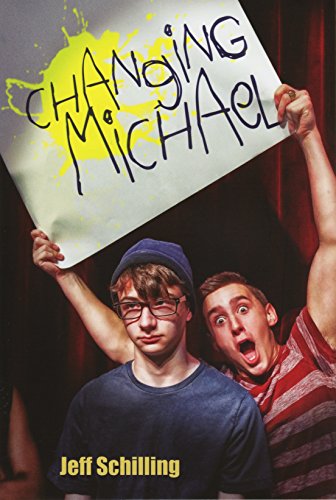 Changing Michael is a book featuring conflicts among teenagers. Matthew is a teen who tries to fit in as well as he can, and it works, for the most part. He's decided that the less people know about you, the better. He doesn't have too many friends, but he's all right with that. Matthew's school life is perfect for him in almost every way. But, then a boy named Michael comes in, and changes everything up. Matthew notices that Michael gets treated badly at school, and decides to step in and help. But, very quickly, what had begun as an act of kindness starts to turn into more of a chore. Not only is Michael incredibly hard for Matthew to work with, it seems like he doesn't want to accept his help! Not to mention, Matthew ends up getting involved in lots of family drama; something he didn't anticipate, and was not looking forward to. Will Matthew be able to change Michael? Or will Michael be the same, dorky kid forever?

Changing Michael is a well-written novel with many interesting characters and plot twists. There are, however, a few criticisms I would have to give it. First, the main character doesn't seem to feel any form of guilt. Matthew was causing problems for people throughout the entire novel, but never seemed to feel any remorse. While this would have been all right in some cases, Matthew didn't paint himself as an unfeeling person. The way he explained himself made it seem like he had a conscious, and that he would feel bad at least occasionally. Him not feeling guilt took away a little bit of him being able to relate to his readers.  The next thing that I didn't like was nothing to do with the plot, but that there were a few spelling and grammar errors. While these are just minor mistakes, and everybody slips up once and a while, these mistakes make the book a bit harder to read. It wasn't a huge problem, but should probably be fixed. My last criticism about Changing Michael was about the character Wanda's personality. It might not have necessarily been a problem with Wanda herself, but that her personality was a bit hard to understand. The way Matthew talked about her, it seemed like Wanda was a girl who was almost like Matthew, not wanting too much social interaction with anyone at school. However, when she spoke to Michael, it almost seemed like she was changing personalities. She talked to him a good deal, and even showed interest in some of the things he talked about. Matthew didn't want to associate with Michael too much due to his interests, so him hanging out with Wanda despite her similar interests confused me a bit. I only got more confused when Michael told Matthew that he and Wanda had talked together for about an hour. I was just as confused as Matthew, who said it couldn't be true, because Wanda never talked to anybody for an hour.

Despite those criticisms, Changing Michael was still a very good novel. One thing I did like about the book was it was realistic. It felt like this could be a real situation with real teens, and felt relatable enough that I kept feeling throughout the novel that it actually happened. I also liked how it showed a very wide range of characters. Some books tend to make all of their characters too similar, to the point which ends up making the book a bit boring. This novel, however, had a lot of characters with diverse personalities, which helped make it more interesting. Another thing I liked was that the characters seem to have growth in maturity and their personalities change a little. In the beginning of the novel, Matthew is self-centered and entitled. Towards the end of the novel, he slowly seems to start caring about the people around him, even seeming to want to be a part of their lives, even if only a little bit. We can see this especially with Chrissy. I also liked that Matthew had a very brutally honest side to him. It added in some comedy, especially when you didn't expect it. Lastly, I liked that the characters in the novel weren't perfect, and had enough character flaws. Not too many, which would have made them seem too much like drama queens/kings, but enough that they didn't seem perfect (which no human is).

Changing Michael is a novel that I would recommend to many of my friends. It gave some laughs, while doing a good job telling an interesting story. I would give it 4/5 stars, and it would be a good book for teens ages 12-14.

The characters in the novel swear occasionally, and there are a few comments about sexual situations, though nothing ever actually happens.
KEYWORDS

Read more reviews by Litpick Student Book Reviewer: emmadedr22247
Recommend this book and review to your friends on Facebook