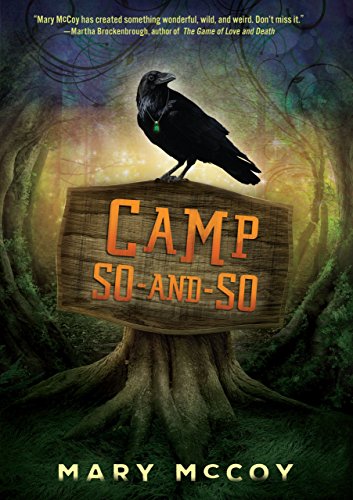 Twenty-five perfectly innocent pre-teen girls, plus one highly dangerous summer camp that is NOT what it seems.

Camp So-and-So is a fast-paced thriller by Mary McCoy. The story begins one day in mid-February, when twenty-five girls receive letters and brochures inviting them to spend the summer at Camp So-and-So. The camp is supposedly a lakeside retreat in the mountains offering a wide range of activities that are typical of upscale summer camps.  All the girls mailed their applications back right away, completely unaware of the terrible surprise awaiting them at Camp So-and-So.

When they arrive at camp, the girls are randomly shuffled into five cabins, each with a unique quest. Each chapter follows one cabin full of girls as they try to complete their quest. Cabin 1 faces off against cross-lake rivals in a dangerous camp Olympics.  Cabin 2 must escape from a murderous former camper. Cabin 3 tries to break an ancient curse regarding a cave monster. Cabin 4 meets their soul mates who are not what they seem. Cabin 5 just struggles to survive.

One thing I really liked about Camp-So-and-So is that the adventure started right away. The exciting quests made it a fast read. This book has a very unique format. It is set up like a play, with each chapter/scene being about a cabin and the five girls who are staying there. The whole book is divided into six acts, and instead of director’s notes, there are narrator’s notes. Although these notes were helpful, some were so long that I began to question if reading them was really worth it.

I also found it very challenging to keep track of all of the characters: 25 girls and their counselors. For most of the book, each chapter only dealt with one cabin (five girls), but at the end, all the cabins came together in a single quest and the girls all jumbled together in my head. Although they were confusing to keep track of, all the characters and their surroundings were vividly described by Mary McCoy.

Because some things that happen in the book are somewhat scary, I would recommend it to readers age 12 and up who would enjoy an eerie, suspenseful read.

There wasn't anything offensive or religious, but sometimes it was a bit scary. Includes mild violence and death.
KEYWORDS

Read more reviews by Litpick Book Reviewer: hawkreader10
Recommend this book and review to your friends on Facebook