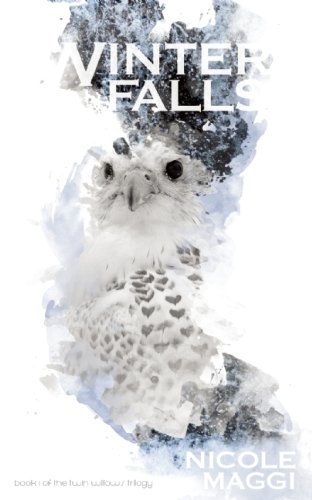 Winter Falls of the Twin Willows Trilogy, by Nicole Maggi, focuses around a girl named Alesia Jacobs who lives with her mom on a goat farm near the sea of Maine.  Her mother, Lidia Jacobs, is originally from Italy before she moved to the little town of Twin Willows, Maine.  A couple years later, Alesia's father dies, and she is left with only her mother, but the town was shown to be very supportive of her and her family.

But then, a famous national company called The Guild Incorporated came to Twin Willows to build a very efficient power plant using the water at Alesia and her now-dead father's favorite place to hang out- the waterfall in the forest.  This devastated Alesia and Lidia.  Eventually, her life gets much harder when she learns that she is one of the Benandanti, which means that she has the power to separate her soul from her physical body.  While in this form, her soul took the form of a falcon, and she joined with a clan of four other Benandanti to fight against the main antagonists, the Malandanti.  They are doing this to reclaim one of the seven major magical sites around the world.  The rest of the story is spent with her attempting to live a double life with her normal self as a teenager in high school and her life as a member of the Benandanti.

In my opinion, this book was definitely a page turner.  So much so in fact that I read it faster than I think I would read another book with its same length.  The thing that really pulled me in was that Nicole Maggi describes the setting of the book so well that I felt like I was in the setting instead of reading about it.  Also, the main and sub characters of the book were very cleverly and well introduced in the sense that I felt that I had a decent hand on what the characters were like.  In terms of the plot line of the book, I love the twists and turns this book lead the reader into.  Next, I'd like to comment on how I loved how she kept it a secret until the end of the book who one of the Malandanti were (no spoilers ;P).  Finally, there was a lot of foreshadowing in the book which was very well blended in, but not too much to overload the book.
The only reasons I didn't put five stars on this include two main reasons.  While the writing itself is exceptional, I would like to say that I think the main characters should have been introduced better, sooner.  What I mean by that is that in the beginning of the book, the characters were not very well described, so for a bit, I was confused about some aspects of some characters.  Also, but this is a more personal preference, I don't like those kinds of extreme romances like the one portrayed in this book.
I would definitely recommend this book to a friend or anyone who is okay with a little swearing and is ready for a good read.
Rating:
4
Content Rating:

The only thing that really may be classified as mature is there is a bit of swearing in the book along with some violence, but neither are not that bad.
KEYWORDS

Read more reviews by this Litpick Book Reviewer: thomasst
Recommend this book and review to your friends on Facebook