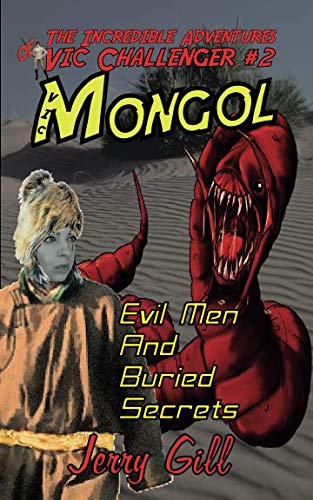 Vic: Mongol by Jerry Gill follows the many adventures of a curious and spunky female Indiana Jones/Nancy Drew type character, Vic Challenger, as she embarks on a quest to find her soul-mate of another life. Vic has something similar to an alter ego, an avatar of a girl named Nat-ul, who lived more than a thousand years before Vic. Vic occasionally transforms into this girl in dreams and visions. Nat-ul's true love died in an earthquake years ago and Nat-ul's long lost soul continues to search for her love through Vic Challenger. This action-adventure documents the mysteries, experiences, and dilemmas that Vic is faced with as she searches for her eternal love.

I took an immediate liking to the protagonist of this book, Vic Challenger. Vic is a confident, astute, curious, and resourceful individual. Although she loves pretty dresses, cloche hats, and the color pink, Vic can take care of herself, doesn't mind getting into messy situations, and doesn't conform to the sexist double standards of her era. She has the most amazing sense of adventure and determination. She reminded me of Nancy Drew in a sense, or of a female Indiana Jones. I admit that I see the better parts of myself in Vic Challenger, even though she is highly fictional. However, apart from Vic, the characters and conversations in Vic: Mongol felt somewhat stiff, bland and hard to connect with. Vic: Mongol by Jerry Gill felt like it wanted to be similar to the classic adventure/mystery stories by Jules Verne, Rudyard Kipling, Sir Arthur Conan Doyle, and Agatha Christie that I adore, but unfortunately it hardly lived up to what I wanted it to be. This is why I wish that it could have been a better read, because I see the potential in it. This book felt like a badly written draft. Many of the sentences seem unfinished, oddly phrased, and even missing words. While reading this novel I continually came across grammatical errors. I also came across several run-on sentences, which made it difficult to read without stopping to look over each paragraph a few times. In most cases it felt like either too much unnecessary information was being provided, or the complete opposite where it felt lacking and unfinished. As the author kept adding new adventures, the initial concept of the book became blurrier as it went along. I feel that this book has too much going on at once, to the extent that it lost my interest as a reader. However, I do admire how this novel was definitely unique while still being reminiscent of classic literature. It has a very promising concept and main character, nevertheless I think that Jerry Gill's work could have had alterations before being published. Although a propitious read in theory, I regrettably feel that Vic: Mongol by Jerry Gill is a mediocre novel at best.

I found nothing majorly offensive in this book, but it does contain several instances of violence and action which may or may not be too much to handle or too aggressive for some readers.
KEYWORDS