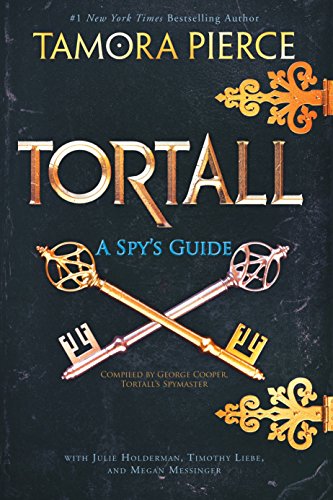 Tortall: A Spy's Guide
by Tamora Pierce
Age Range - 12 and up
Genre - Fantasy

Tortall: A Spy's Guide is centered around the spy system that was set up by George of Pirates Swoop, formally the Rogue of Corus. There is a collection of background information that spans the Lioness series, The Immortals series, Keladry's series, and Aly's duology in the Copper Isles. There are accurate timelines, letters about characters, events, codes, and rules about being a spy and the lattice structure of their leadership, character profiles, diary entries, Tortallan advertisements, and even some more characterization of the family of Pirate Swoop.

I give this a full five stars. I'm an avid Tamora Pierce fan, and this book wraps up a lot of loose threads into a neat bundle. The two timelines are quite helpful as they consider information from all the series. There are a few pictures that depict some secondary characters, which were quite amazing for me as now I know what some of them look like. It was just plain interesting to see what went on in the background of the books themselves, like how Lord Wyldon became the castle's training master, why Neal went into knight training, letters between Alanna and George about their children.

The printed writing was what you might expect from a quill on paper, which adds a nice effect as if you're looking through actual old documents. The first part of the book is a compilation of advice that George gave to his daughter, Aly, about a spy's life--which is written with the same Tamora Pierce style as in the other mainstream books. There are even a few spy reports about Aly's "first test" of a spy and how that turned out.

To any avid Tortallan fans out there, this should definitely be on your list.