Throne of Glass review by alphatauri 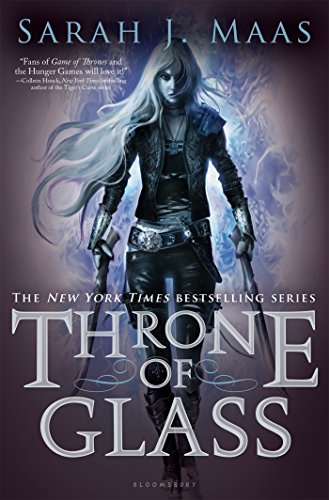 Throne of Glass
by Sarah J. Maas
Age Range - 12 and up
Genre - Adventure

Many years have passed since the last king ascended to the throne of Adarlan. Since then, he has outlawed magic, conquered nearly the entire continent of Erilrea, and ruled with an iron fist. It's been one year since assassin Celaena Sardothien was sent to the salt mines of Endovier for her crimes. Now, Celaena is brought before the Crown Prince of Adarlan and offered freedom...if she can defeat twenty-three other thieves and assassins in a competition to find a Champion. But when the other Champions start turning up murdered, one by one, it's clear that there's a lot more at stake than freedom. Can Celaena not only survive the murders, but also solve them and become the king's assassin?

When I first learned of the premise for Throne of Glass, I was immediately intrigued. It sounded like a mix between classic high fantasy and The Hunger Games with an amazing kick-butt heroine. Turns out, Celaena actually exceeded my expectations! She is snarky and strong, yet utterly realistic. The other characters are also very well-drawn out too. The world-building is vividly descriptive. There is even a castle made of glass in the book! Not only that, but from page one, the plot sucks you in. I dare you to read the first sentence and not keep reading. There's so much suspense in Throne of Glass, and the last battle scene is truly epic. I do, however, have two complaints about Throne of Glass. First, the love triangle was not very well-developed and didn't fit into the book at all. Second, I would have liked to seen a bit more of Celaena's back-story. Other than that, Throne of Glass is a great fantasy read. It ends by wrapping up most things while leaving room for a sequel. I highly recommend this to fans of Kristin Cashore, Rae Carson, or Tamora Pierce, and I can't wait for the second installment!

There is some foul language in the book as well as some descriptions of brutal murders.
KEYWORDS