The Terminals review by jotaf 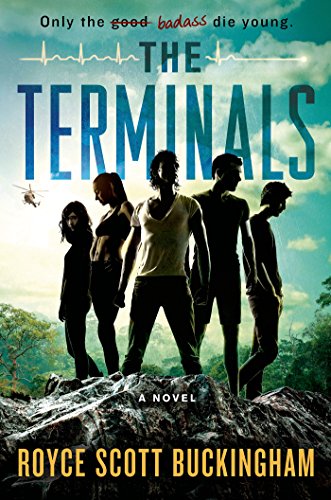 The Terminals is a book about a boy named Cam who develops a brain tumor.  One day in the hospital, a strange man comes to him and gives him a choice.  Cam could spend the rest of his shortened life in his comfy hospital bed listening to music, or he could join a group of ten kids called "The Terminals" and help make the world a better place.  Rather than waste the time he has left, Cam decides to join.  Only, when he gets there, none of his teammates look like they have brain tumors.  They all look like they are at peak performance; some look even better.  Cam soon learns that they are taking an experimental drug that makes their physical abilities beyond normal and suppresses the negative effects of their tumors.  But there is a catch.  After a year of taking the drug, it will kill them.  Seeing as their tumors will kill them in around a year or less anyway, they feel it is worth the risk.  The team is trained for the dangerous missions they will undertake, but when the team finishes their first mission, Cam begins to wonder if something more sinister is going on.  Will Cam find out what is going on, or will his feelings be wrong?  Find out in The Terminals!

In his young adult thriller, The Terminals, Royce Buckingham has written an exciting smash hit. This is the first book in his new series.  I really thought that The Terminals was an amazingly written book.  It included a whole bunch of the things I enjoy in a book, like action and mystery, but in a more appealing way.  One of the unique parts that I really liked was when Cam’s friend, Mason, left Cam a secret message using the game Stratego.  The one thing I didn’t like about the book was that the ending was a little confusing. It was hard to know exactly who, if any, of his friends died at the end.  I would recommend this book to anyone over age 13 who likes books with action, mystery, and suspense.

There is some death, killing, blood, and mature language.
KEYWORDS