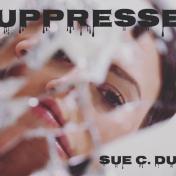 Suppressed, written by Sue C. Dugan, is a story about a young woman named Annie who is involved in a devastating car crash. It was a crash that took her best friend’s life and left Annie paralyzed from the neck down. Annie begins grieving the life she once knew and becomes a prisoner of her own memories. She yearns to brush her own hair, to feed herself, to walk. The life she now must learn is one she feels will only be filled with empty hours spent counting the mere dots on the walls around her, that is, until her doctors tell her about a surgery that will graph her head onto someone else’s body. It is a surgery that has only been done twice before and never in the United States. Annie, intrigued by this opportunity, is willing do anything to free herself from the prison that is her body, even if it kills her. The surgery is very dangerous, and if she is fortunate enough to survive, the cost to her as an individual could be high. The chemical change in her body could completely change her personality, wipe away all her memories, and completely change who she is as a person. Is the risk worth taking if, when she wakes up, she might not be Annie anymore?

Suppressed was a very interesting read.  I found the concept of transplanting an individual’s head onto another body fascinating to read about. How science could take Annie’s head and transplant it onto another person’s body, connecting the anatomy in a manner that would allow Annie to physically function again was so intriguing. Ironically, despite my initial fascination, I did find it difficult to be drawn into the story. Once I did become more engaged in the storyline however, I enjoyed reading the book.

Annie was a very interesting main character as she added an element of humor to this book with her sarcasm which demonstrated her coping skills while dealing with such a serious injury. I found it interesting to see her rapidly mature throughout this story as she was forced to deal with life altering issues and decisions that were far beyond her years. I held a high level of respect for her during those moments as her life drastically changed from being an active, young woman to being one dependent on all of those who were around her for all of her daily needs. The book allowed for moments where her young age presented with her character, reminding the reader that she was a teenager who was dealing with very adult issues.

Sue C. Dugan’s writing was very descriptive and detailed. The way she eluded to Annie’s emotions was beautiful, so well written that I could actually feel them as I read. The way she described the settings and scenery was written in a way that allowed me to visualize the detail clearly and vividly.

This book was well written and had an intriguing story line. It is perfect for someone who is interested in medical and scientific advancements. While this book is fiction, it’s the philosophical element of "what if" that was really interesting.

Sex is discussed, and a memory surfaces about a sexual situation but that is all, and nothing is described in detail.
KEYWORDS

Read more reviews by this Litpick Book Reviewer: Reegan_Reads
Recommend this book and review to your friends on Facebook