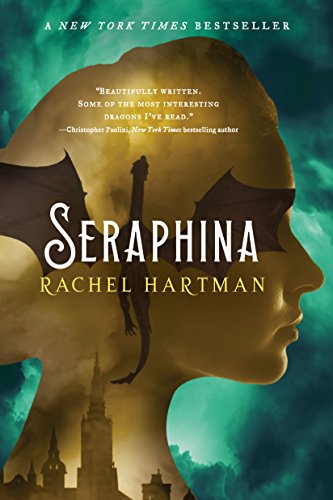 Seraphina
by Rachel Hartman
Age Range - 12 and up
Genre - Fantasy

Seraphina is an exciting book about an unusual girl whose name happens to be Seraphina.  She lives in an ordinary house in the town of Lavondaville, the biggest town in the capitol of Goredd.  Seraphina isn't just an ordinary girl, however; she is half-dragon.  Her father is a human, but her mother, who died giving birth to Seraphina, was a dragon.  Seraphina herself, though, didn't know she was half-dragon until she was older.  She has lived most of her life with her father telling her not to reveal herself to others, just in case they might find out what she really is.  Nevertheless, she auditions to become the assistant musician in the castle not far away.  Regardless of her father's worries, she does well at her job, until one day, one of the princes is found dead in the woods.  The whole of Goredd is thrown into an uproar wondering who killed him.  Some think it was the Sons of St. Ogdo trying to frame a dragon.  But most think it was an actual dragon.  Together with Prince Lucian, another prince, Seraphina tries to find out who actually committed this terrible crime.  Find out who did it and what happens in Seraphina!

I think Seraphina is a great book that is worthy of its many awards and praise.  I especially liked that the author, Rachel Hartman, made the characters, and even the world they live in, seem believable.  Something else I loved about the book was, because there was a gap between the prologue and the rest of the story, Rachel added an excerpt at the end that kind of filled in the gap.  Pretty much the only thing wrong for me was that it got off to a slightly confusing start, but after not even ten pages it picked up considerably.  I am eagerly awaiting the day I read book two of this series.  I would recommend this book to anyone who likes mystery, action, and suspense, yet can still take some bad words and a little bit of death.  If you like The Inheritance Series, I really think that this book is also for you.

There are some bad words and death.
KEYWORDS