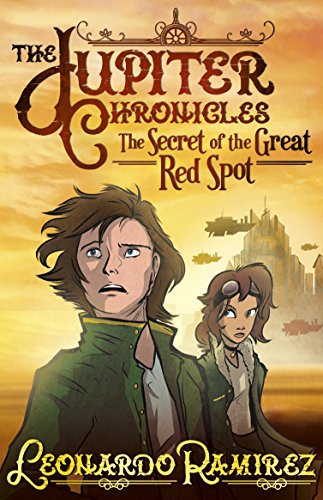 In The Jupiter Chronicles: The Secret of the Great Red Spot by Leonardo Ramirez, the year is 1892. Ian Castillo walks in on his sister, Callie, trying to use a telescope that has been stored in the attic for five years. It is special to Ian because it was the last gift their father gave him before he mysteriously disappeared. When the kids least expect it, it turns itself into a space ship and launches them into space.

When they get to Jupiter, a Martian Doomslayer ship captures them. In prison, they learn their father is First Petros (Peter), the son of a Jovian king who was killed while Peter was living on Earth with their mother. The murder left Jupiter without a leader, so Peter was taken from Earth and brought back to space. Ian and Callie realize the Martians want complete control of Jupiter, and their father is being held captive against his will now. They can’t believe their telescope has led them to this action-packed adventure that may reunite them with their father if they can successfully rescue him.

Since this book is a steam punk adventure, it also has two chapters at the end titled “Life on Earth in the 1890s” and “A Brief History of Mars.” Both give readers more background information, so they can understand the story even better.

The Jupiter Chronicles: The Secret of the Great Red Spot is an exciting book with clever action that never stops. I enjoyed reading about the weapons, vehicles, and robots that were brought to life from the mist on Jupiter. All of the battle scenes were easy to follow, and I especially liked the way the characters were presented. Interesting space creatures fighting for power were mixed with an ordinary brother and sister from Earth. While the kids bickered with one another, they also learned the value of teamwork by working together. Even though the story is set in the 1890s, the Castillo family felt real as they struggled with similar modern-day problems that exist in single parent homes. I’ve never read a steampunk adventure before this one, so I think being able to weave all of these different elements into a story that makes sense for ages 8-12 is amazing!