Say It Ain't So review by Dsun_ 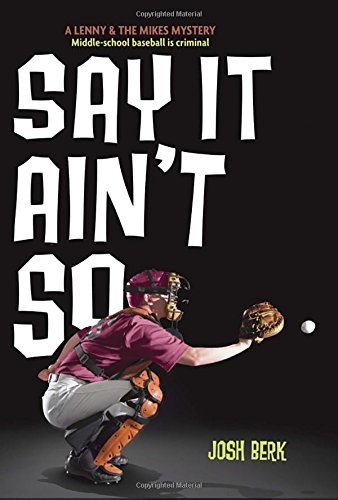 In Say It Ain’t So by Josh Berk, Lenny is trying hard to help his friend, Mike, make the middle-school baseball team as a catcher while competing against the school bully, Davis. Unfortunately Mike only makes it in as a backup catcher while Davis makes it in as the main catcher. Unexpectedly, Davis gets busted for stealing a phone and hiding it in his shin guards. Davis denies he did anything wrong, but the coach does not believe Davis. Other Mike, Lenny’s other friend, decides to start hanging out with Davis and learns that Davis continuously denies he stole the phone. Lenny is soon wrapped in a whole new mystery and he has only one question to answer: Was Davis framed?

I felt that this story immediately captivated me from the start. Josh Berk has an incredibly good natural tone, as if he was Lenny talking to the reader. I lent Say It Ain't So to a friend during an extremely long testing period because he was bored and after reading for a while, he said it was really good and asked to read it later. After quickly reading it, he told me he really enjoyed the book and would love to read any other books by Josh Berk. I introduced him to the other book called Strike Three, You’re Dead.  Although Say It Ain't So was an incredible book, I believe the mystery part was a bit too rushed and that there was too much commentary for the games. Overall, a great book!

Did not see anything offensive at all.
KEYWORDS

Read more reviews by Litpick Student Book Reviewer: Dsun_
Recommend this book and review to your friends on Facebook