Precocia: The Sixth Circle of Heck review by spic... 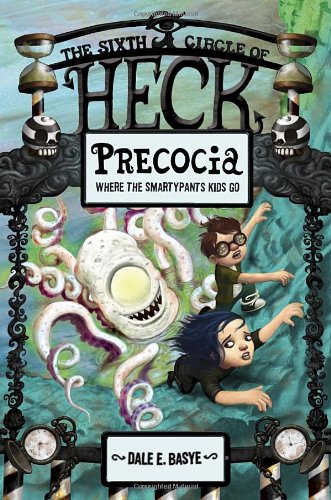 After the siblings wreak havoc in the five other circles of Heck, Bea “Elsa” Bubb, Principal of Darkness, sends Milton and his older sister Marlo to Precocia, where the smartypants kids go.  Precocia, the circle for kids who grow up too fast, is run by vice principals Napoleon and Cleopatra.  Here children are doomed to dress like adults, think like adults, and act like adults.  Their classes are taught on the Sylla-Bus, driven by Kali, the giant blue Indian goddess.  Forever and ever the bus goes around the almost infinite building, where Mozart, William the Kid, Einstein, and Dr. Jung teach their perverted classes over and over again.  Despite the fact that the children have to sleep in filing cabinets, eat inedible microwave meals, and take notes constantly during the day or their pens will shock them, Milton and Marlo discover that indeed there is something worse: Milton has a bad reaction to a glowing Swine Cooties vaccine and is sent to the infirmary, where through trial-and-error it dawns on him that Napoleon and Cleopatra have a darker reason for Precocia - to eradicate childhood forever.  Milton and Marlo must use the Time Pools - portals between our world and an alternate universe - to fix the future before the two Vice Principals ruin the world.

The book had an interesting plot - funny, original ideas and names - and the premise was certainly not pedestrian! Two children stuck in the afterlife, sent all the way down to Limbo where a demon principal decides which circle of Heck they will go to.  Some parts of the book were a little awkward, and the entire story would have been perfectly fine without all of the crude parts.  Precocia, in a nutshell, was a semi-fluff book that I could easily read several times over without getting the point at all.

Read more reviews by this Litpick Book Reviewer: spickle
Recommend this book and review to your friends on Facebook