The Opposite of Hallelujah review by swimmer1430 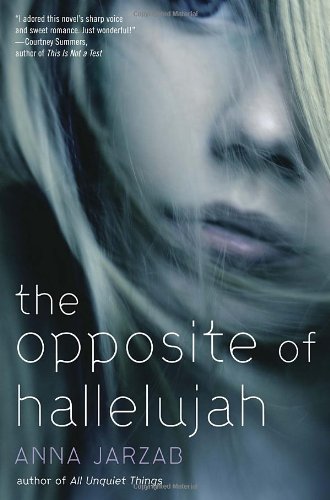 Caro has a pretty good life: two loving parents, loyal friends, and a fun boyfriend. She's even excited to start her junior year of high school. But things change when Caro's older sister returns home after spending eight years in a convent. The fact that Hannah is eleven years older than Caro makes them practically strangers. Caro doesn't know how to explain Hannah's presence to her friends, and her tight family is shaken up by Hannah's mysterious return. What Caro doesn't know is that Hannah is hiding a secret, one that she's buried deep inside for many years. This secret could be the reason Hannah left the convent, so Caro is determined to figure out what it is.

I was excited to read The Opposite of Hallejuah because I had previously read Anna Jarzab's other novel and loved it. I was hoping this would be just as good as its predecessor, and luckily for me, it was even better. The Opposite of Hallejuah has many themes, all of which were woven seamlessly into the story of Caro and her junior year of high school. Religion plays a big role in the novel, and I think the author handled that part wonderfully. There was a lot of soul-searching between Caro and her sister Hannah, and I think the book addressed those issues about family and sibling relationships very well. Grief and forgiveness were important aspects of The Opposite of Hallejuah as well, and I think the book showed just how difficult healing is. Overall, I thought this novel was very deep but at the same time could be humorous and easy to read. The fact that so many different elements were incorporated shows just how great this book is.

There is some underage drinking and inappropriate language.
KEYWORDS