This Mortal Coil review by jotaf 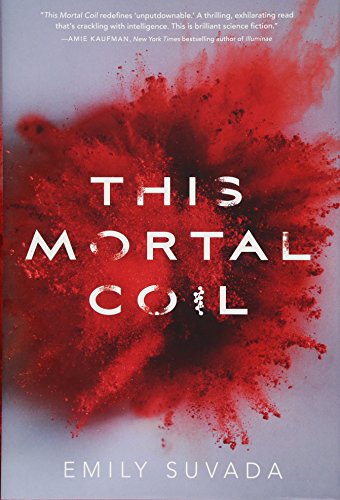 “Never let them take you. No matter what happens, stay away from Cartaxus.”

Those are the last words that Catarina Agatta heard from her father before he was taken from her by the agency known as Cartaxus. That was about two years ago.

In a tech-filled world ravaged by a mysterious and deadly virus called “Hydra,” Catarina has struggled to survive. Outside of Cartaxus’ safe-house bunkers, the world is harsh, but the hardships are worth it to her, as long as she is able to fulfill her father’s last wish. One day, though, as she is settling back into her cabin after a special kind of hunt, a Cartaxus agent comes to take her but brings heartbreaking news. He tells her that her father died, but before he did, he finished making a vaccine for the virus. The problem is it’s encrypted and Catarina is the only one who can crack the code.

Now Catarina must decide whether to continue hiding from Cartaxus or trust this mysterious soldier and the words of hope he brings.  Even if she does trust him, how is she to go about cracking the code that even Cartaxus’ master hackers couldn’t solve?

This Mortal Coil is by far one of the best dystopian sci-fi books I have read in a very long time. This book hides a surprise around every corner; just when you think you have it all figured out, there’s another plot twist.

Another thing that I really enjoyed was that I felt like I had a connection with the characters. Lots of authors do a good job with this, but I felt like I could connect with these characters more than usual. I was able to empathize really well with them.

I noticed that it did share a common theme with The Maze Runner books and some other dystopian novels: showing an outbreak of a seemingly incurable plague.  This Mortal Coil had its own unique flair, though, and a completely new take on every aspect of this intriguing concept. I know that I will be anxiously awaiting the next book in the series.

I would recommend this book to anyone ages 12 and up and to anyone who enjoys a sci-fi dystopian thriller. This book has something for just about everyone.

Some death, violence, and language.
KEYWORDS