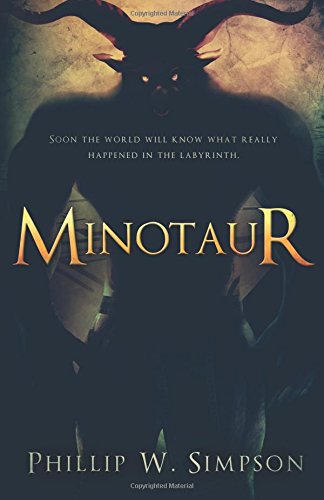 Have you ever wondered what really happened in the labyrinth? Phillip W. Simpson’s Minotaur tells the story of the young Minotaur, Asterion, from birth. Asterion had it easy in the early stages of his life, living in King Minos’ palace and playing with his mother. He never met his supposed father, Minos, until Minos punished him for accidentally hurting his half-sister Phaedra. Asterion avoided Minos’ rage, and he was afraid that because Minos could not hurt him, he would take it out on his loved ones. He then fled his home island of Crete and met a traveller that would go on to eventually cause the death of Asterion’s brother. Minos blamed Asterion for his son’s death and threw him into the labyrinth. Who is this traveller? Is Minos really Asterion’s father? And most importantly, what happened in the labyrinth?

Minotaur was a good, surprising tale. It also changes the readers’ perspective on myths by making them rethink everything. It’s a mix of adventure, romance, and war. There are some sad scenes, like when Asterion’s brother dies, and when Asterion is thrown into the labyrinth. There is also a bit of romance in this book. It’s very sweet. I would recommend this book to readers of the Hunger Games and The Maze Runner.

Read more reviews by this Litpick Book Reviewer: O.B. WAN
Recommend this book and review to your friends on Facebook