Iron and Blood review by Lainebarnes 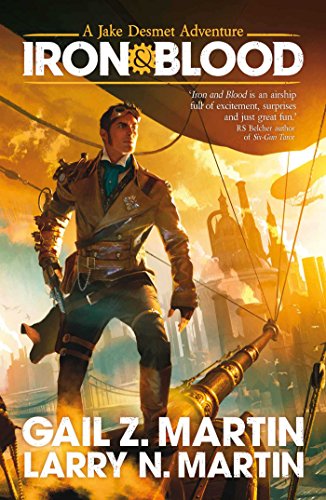 This book is about two men named Rick Brand and Jake Desmet, and Jake's cousin Veronica. This group of friends came together through family, and the Brand and Desmet shipping company. The company ships magical items, weapons and cursed relics of unknown origins.

The story takes place in New Pittsburg in the 1890's. There were several murders committed in the area, one of which was Jake Desmet's father. Jake, Rick and Veronica thought that all the murders in town were connected and they set out to solve the crimes. These murders take the trio on a wild ride. During their adventures, they meet many entities along the way: ghosts, witches and mechanical men. They also meet many allies who help defeat dark spirits and protect the group from a witch named Drago Velleze and his accomplice Richard Thwaites. Velleze and Thwaites work together at the Vesta Nine Mine finding buyers to purchase Terma Quartz, a type of crystal that is several times more powerful than regular quartz and is capable of running a steam engine with a quarter inch shard of the gem.  By mining the Terma Quartz, they unleash the Gassyans, many dark spirits suspected responsible for the murders along the river. Each clue leads them closer to solving the murders but each clue also takes them closer to potential death.

My opinion of this book was that it was well thought out and each chapter made a new impact. The book was very interesting, but it was also scary and gruesome. The murder scenes that were described were vivid giving me a feeling of fear or doom. There were homemade "werkman", also known as zombies, who are dead people following orders from Thwaits to kill anyone trying to solve the murders. They had human features but were actually made of cogs and gears that when they were attacked, would spew out blood and dead flesh. Yuck! Other than the gory stuff, I enjoyed the book very much and I would read it again. It was very adventurous, but also made me feel scared at times. I would not recommend this book to anyone under the age of 14 due to its graphic language and images. The scenes are very bloody and could be disturbing to some readers. They do add to the tale but I would caution readers of this book for fear that it may scare them. But overall it was well thought out and maintained a good flow.

Read more reviews by Litpick Student Book Reviewer: Lainebarnes
Recommend this book and review to your friends on Facebook