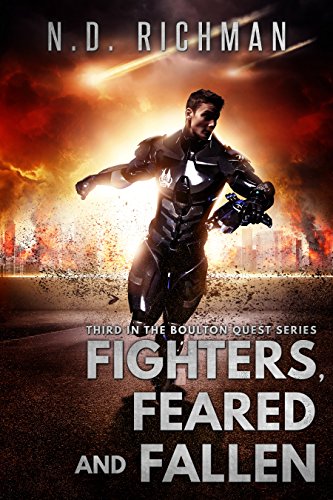 Fighters, Feared and Fallen
by N.D. Richman
Age Range - 12 and up
Genre - Adventure

Fighters, Feared, and Fallen is the third story in the Boulton Quest series. It is an epic war/futuristic novel mainly centered around Thomas and his war against the “Toads.” Thomas is astonished when all communication systems are taken over and riots are breaking out. He and his friends go into hiding in their bunker. After doing research, Chris finds out that the electrical surges were actually time machines in use! Thomas wakes up knowing something is coming, but he is calm. As the group tries to hold Thomas back, he is suddenly sucked into a time portal, and the group is left behind!

Thomas finds himself in the future, and he is told about the Toads, the people that are killing everyone and destroying everything. So now he is training past his limits with his assigned squadron to become Toad-killing machines. Will Thomas and his squadron be able to kill all the Toads? Will Thomas ever make it back home? Find out in this thrilling book!

N. D. Richman is back with a thrilling new addition to the Boulton Quest series! This series is getting more action-packed with every book! The characters are very well described; I was rooting for Thomas throughout this book.

I like that N. D. Richman took this book to a new level by changing the setting to a futuristic one. This third book adopted a more sci-fi-like feeling. Because it is the third in the series and follows the stories of three main characters, it is not a stand-alone book. This series is so addicting; with every addition you can't wait for the next book because each one leaves you hanging! I would recommend this book for ages 12 and up.

There was war and killing.
KEYWORDS