Camping, hiking, fishing, hunting, and getting into trouble. What a great way to grow up. One of my favourite memories is sitting on the handlebars of my brother's bike, my dog on my lap, as he careened down the steep mountain trails above our home in Kamloops, BC. My brother and I had caves, tree forts, frog filled ponds, and cactus patches to play in, and sling shots for protection. Somehow I survived my childhood and proudly moved on to fatherhood. My children, Christopher, Michael, Thomas, and Katherine, kindly donated their names, characters, and ideas to the Boulton Quest series of books.

The Knack of Writing Fiction

We are pleased to have ND Richman join LitPick to tell us about books as gifts, his favorite childhood books, and why his books would be great for avid or reluctant readers.

Why are books a great gift? Leverage.

Consider a lever. A small force applied to one end of a lever multiplies the force on the other.

Now consider the leverage in a book. A single book can create in a child a lifelong love of literacy, and the knowledge gained through a lifetime of reading is a force that can be matched by none other.

We forget many things about our childhood, including Christmas and birthday presents, but we all remember the book that forever captured our imagination. Think back to the excitement you felt as you hid under your covers, clicked on your flashlight, and found your page.

It can take many attempts to find that book, and not gifting a book is discarding yet another opportunity to ignite the love of reading in a child.

I have two books I distinctly remember from my childhood — My Side of the Mountain by Jean Craighead George and Lost in the Barrens by Farley Mowat. These are stories of young people fighting for survival in the wilderness, and being an introvert, I could relate to them and was drawn into them for that reason. These books sparked my love of reading and writing.

Brothers, Bullies and Bad Guys, the first book in the Boulton Quest Series, is a fast moving action and adventure story written to capture the imagination of boys and girls and become the book that stays with them forever. To that end, it has already been a success as new readers have picked it up around the globe.

Brothers, Bullies and Bad Guys has been recognized for its high quality by the Book Readers Appreciation Group and Awesome Indies, and it took first place in the Juvenile Fiction category of the 2015 National Indie Excellence Book Awards, so it’s a book you can trust.

Whether your child is an avid reader or a reluctant one, there’s a good chance they’ll love the Boulton Quest Series. Please pop over to my website and check out what some parents have had to say about it:

Mr. Richman, thank you so much for your articles and interviews with LitPick this year! We have appreciated and enjoyed all of them! We are looking forward to your next book! Happy Holidays and best wishes for a happy and healthy 2016 to you and your family!

On today’s Extra Credit, LitPick is excited to welcome ND Richman! He is the author of the Boulton Quest series, which he wrote with his son, a reluctant reader, in mind. Richman says, “I set out to write a series of books that captivated from the first chapter and pushed the reader through with a solid plot, relentless action and adventure, and humour.” The series’ success with kids, parents, and grandparents suggests that he has definitely achieved that goal.

I’ve never written an outline, but I have a solid outline of the entire plot and the characters in my head before starting the book. Many of the details come to me as I go along. I often envision them a few days before writing them.

For the most part I don’t worry about it. Experts say I should write every day, but my writing is actually quite sporadic. If nothing is hitting the paper I put it aside for another day and think about it instead. If I’m pressured by a deadline and have writers block, I’ll move to a different chapter or revise something I’ve already written. If I write a large number of chapters without revision I get bogged down, like being distracted by unfinished business. Cleaning up the preceding chapters will usually get me going again.

I’d love to live inside the world of Leviathan - a series written by Scott Westerfield. He creates a fascinating environment based on historical occurrences. I love the machines and animals he creates, the characters that use them, and the history. In particular, the Leviathan itself, a whale airship, would be a very cool place to spend a summer.

Going back to my childhood, because I read every one of these books I could get my hands on - every James Bond movie ever made.

In fairness, I don’t watch a lot of movies, so these are really the only two examples I remember.

I recently had the pleasure of listening to Diana Gabaldon at “When Worlds Collide,” a writers festival in Calgary, Alberta.

Diana is strong, funny and sensitive. She read an excerpt from her next book and by the end she was crying, and I was crying.

I am so impressed by her.

At the end of the conference I literally bumped into her in the lobby. She looked at my name tag and said, “Hi, David.” Most sane people would have started a conversation with her, or at least tossed their book at her and said, “Read this!” I was so terrified I asked her how she was doing and dashed off.

Sigh, I’d love to get a second chance.

So, Diana Gabaldon, but I’d have to bring my wife, because my wife gives me courage.

You started writing the Boulton Quest books for your son, a reluctant reader. Were you also not very keen about books growing up, or have you always enjoyed reading?

I have four children. Two of them love to read and two, not so much. I was a voracious reader as a child. Farley Mowat kicked me off and then I jumped to Stephen King, Ian Fleming, and Gregory McDonald. I read The Grapes of Wrath at twelve years of age. I don’t read much now and not because I wouldn't like to. Between children, writing, and running a business, I just don’t have the time.

Thanks for spending extra time with us, Mr. Richman. Parents and teachers, give your reluctant readers a Boulton Quest book!

Today author ND Richman joins LitPick for Six Minutes with an Author! Mr. Richman is the author of Brothers, Bullies and Bad Guys and Sinners, Survivors and Saints, both books in the Boulton Quest Series.

I'm not sure how common it is to write a book unintentionally, but that's what happened to me. I was trying to get my son Michael interested in reading when he was nine years old, he's seventeen now, and to that end asked him what kind of books he liked (action with humour), what type of plot would hold his interest (mother and father are kidnapped and the bad guys go after the kids), and what type of characters would be in his story (two brothers - one mean and one nice). The premise of my first book and the two main characters were actually created by my nine year old son.

For fun I started writing and found I couldn't stop. One year later I had 50,000 words on paper. I didn't think the writing was good enough and tossed the manuscript in my basement. My wife pulled it out and gave it to a writer friend of hers, Gloria Singendonk, who reviewed the entire manuscript, called me up, and told me it was too good not to be published. The first in the Boulton Quest Series, Brothers, Bullies and Bad Guys, was born.

Jean Craighead-George and Farley Mowat were the first chapter book authors I read, and I've never forgotten them. Their books (My Side of the Mountain; Lost in the Barrens and Never Cry Wolf) never leave my thoughts when I write.

Reading time is a previous commodity for me so I read for entertainment. I quickly lose interest in complex plots, lengthy descriptions, and endless dialogue. I recently tore through every John Grisham novel I could get my hands on.

Oh dear. Where to start?

First - patience. Writing takes time. Revision takes time. Don't ever rush a book into print. And yes, I've done that and lived to regret it.

Third - It's really hard to give a negative critique of someone's writing and one willing to take the effort is your best friend. Try every suggestion given to you, even if you don't agree with it. You can always write it back out. The biggest improvements in my writing came from trying ideas I didn't agree with given to me by people severely critical of my submissions.

I was recently asked to supply a picture of where I write by Awesome Indies, a great resource for writers by the way, and I wrote the following for them.

I write in cars I'd write on mars

I write on beds I need more meds

I write my fables on the kitchen table

I write at dance, badminton, and football too, sometimes I'll even write in the loo.

Just about any place I can find some space.

I write on the couch and in the closet, and all of this for little profit.

With four kids and a crazy job you see, I write when I have time for me.

Which is rare and precious and seconds few, not much time to write anew.

So to give you pictures of all these places, well on holidays I only snap faces.

Pictures of dark and dingy places for sure would go quite wasted.

So I'm sorry I can't complete your request. This poem is my personal best.

I've got four great teenage children - Christopher, Michael, Thomas and Katherine. They and my wife, Tracy, have been really supportive of my writing. I'm an Automation Engineering Technologist which is as technical a job as you can get (I'm still not sure where writing fiction came from). I'm a graduate of the Outward Bounds Wilderness Survival school and I love back county camping.

Mr. Richman, thank you for a great interview and thank you to Michael for getting you started as an author! 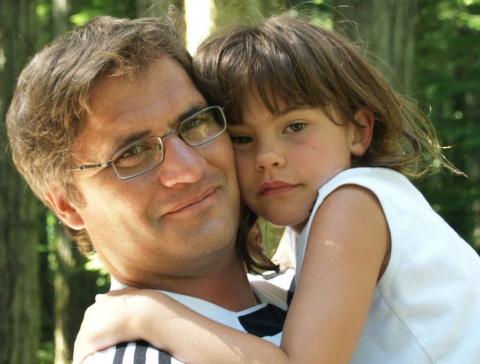