Even When You Lie To Me review by CassieTaylor1203 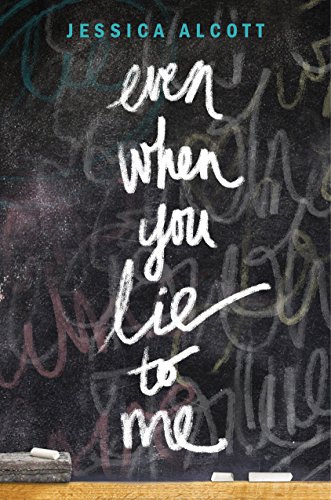 Charlie is a senior in high school, but she is not looking forward to her final year in school at all. Her best friend Lila is everything Charlie thinks she is not: intelligent, sociable, funny, and gorgeous to boot. Charlie is used to being glanced over when she and Lila are together. Her mom just can't seem to understand her, and is forcing her to join an extracurricular activity to try to make more friends. She knows she's going to hate it... until she meets her new English teacher, Mr. Drummond.  She thinks he is everything she's always wanted. And she's not the only one who falls hard and fast. This novel takes the idea of crushes on teachers to a whole new level, and explores parts of it that are so far untouched.

Overall I think this was a fairly decent novel. Probably closer to a 3.5 than just a 3. I liked the characterization of all of the people within the story, even if it seemed like some of them had no reason to be there other than for additional conflict (like Mike and Austin). My favorite thing the author did was to portray Mr. Drummond as an ordinary guy. There is an entire section dedicated to describing how normal he was, and how he was not really all that handsome or unique in any one way. But Charlie liked him because he showed her special attention. She viewed him as this super amazing person, and was appalled when he showed any signs of just being ordinary because it did not fit the view she had of him. I felt the author executed this extremely well. Many of the metaphors were well written, but didn't really flow with the story. Addionally, it was hard sometimes to tell exactly what the point of some scenes were. The relationship between Charlie and Lila was great because it was realistic, and it showed that while they were best friends, they did still fight sometimes, like all best friends do.

Most girls can relate to having a crush of some sort on a teacher, and this novel shows what the consequences can be if you are not careful about it and let it go too far. In general, I did enjoy this novel, and would recommend it to friends if I knew they would enjoy it.

Numerous sexual situations and some morality conflicts. Also a bit of swearing.
KEYWORDS

Read more reviews by this Litpick Book Reviewer: CassieTaylor1203
Recommend this book and review to your friends on Facebook