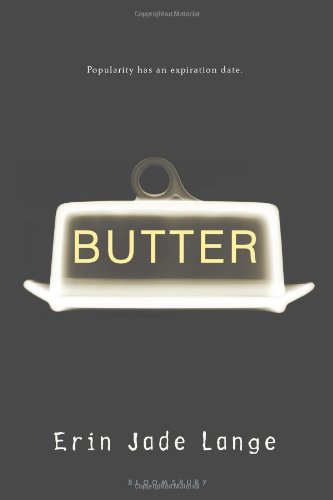 A lonely obese boy everyone calls "Butter" is about to make history. He is going to eat himself to death-live on the Internet-and everyone is invited to watch. When he first makes the announcement online to his classmates, Butter expects pity, insults, and possibly sheer indifference. What he gets are morbid cheerleaders rallying around his deadly plan. Yet as their dark encouragement grows, it begins to feel a lot like popularity. And that feels good. But what happens when Butter reaches his suicide deadline? Can he live with the fallout if he doesn't go through with his plans?  With a deft hand, E.J. Lange allows readers to identify with both the bullies and the bullied in this all-consuming look at one teen's battle with himself.

When I had first read the description, I knew it was going to be about a boy eating himself to death, but I thought that Erin Jade Lange may sugarcoat it a bit! Boy was I wrong. This book was absolutely NOTHING like I expected.

I can't emphasize enough how dark the book is. Of course, one of the main themes in Butter is bullying, so Butter's tormentors are discussed in great detail. Also, a menu for New Year's Eve-when he will go live on butterslastmeal.com- is planned out and altered throughout the book. I found it incredibly morbid that he was planning every food with which he would commit suicide and that his peers were encouraging this (many suggested foods for him to eat!).

I did however find this book incredibly insightful on the life of an obese person. Being constantly stared at, reverting back to comfort foods, teasing, and fighting to lose weight. Butter in particular gets mixed emotions from his parents and peers. His mother continuously cooks and feeds Butter high calorie snacks, while his father simply looks at him with disgust. Anna, the most beautiful girl in school will not give Butter a second glance. Really, his only comforts in life are his saxophone and being online as his alter-ego JP, a tall, good-looking, athletic boy, who chats with Anna for long periods of time.

Overall, I found that Butter was a good book, but I was shocked by just how morbid it was!

Read more reviews by Litpick Student Book Reviewer: ravenclaw
Recommend this book and review to your friends on Facebook