Better Nate Than Ever review by Love2read 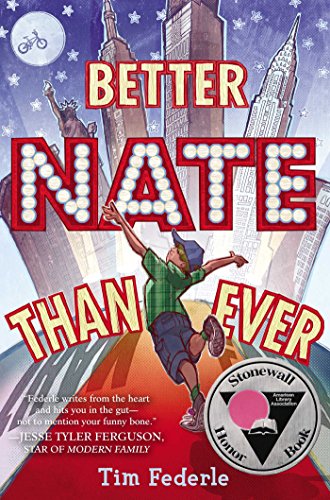 Thirteen year old Nate Foster has always dreamed about being on Broadway, but instead he is stuck in Jankburg, PA, being shoved in lockers and bullied by James Madison. Nate's best friend Libby discovers that E.T. is the next Broadway production and encourages Nate to audition. When Nate arrives in New York by himself, he finds that he loves the city and its people. As number 91 on the audition list, Nate swiped his brother's ID and registered as Anthony Foster. He waits his turn, only to find that the casting agent knew he was alone, which makes him ineligible to audition...until a long lost relative claims him as her own, which means Nate is back in the race! Nate never gives up no matter how many times he gets rejected. He won't stop until it's his name in lights.

I think this book was inspiring by teaching you to always follow your dreams. It has lots of twists and turns that make you want to turn the page. I recommend this book to readers who like fiction with a hint of adventure. Overall, this book was really great.

There are only a few sentences with alcohol references or sexual comments.
KEYWORDS

Read more reviews by this Litpick Book Reviewer: Love2read
Recommend this book and review to your friends on Facebook