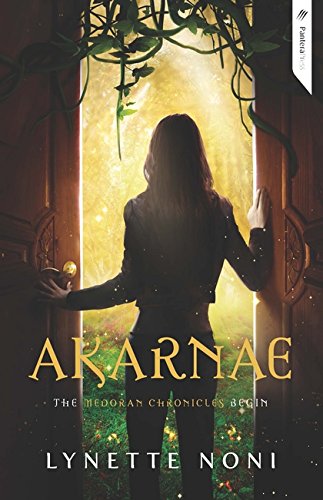 Akarnae
by Lynette Noni
Age Range - 12 and up
Genre - Fantasy

Alexandra Jennings already has an unusual life. Her parents are archeologists and they travel the world. Alex’s parents decide to send her to a boarding school, well more of a bored-ing school. They drop her off and head to the conveniently isolated and technology-less Siberia. After Alex is pushed into a fountain she wills herself to be anywhere else. She opens a door and falls straight into Medora, the sister world to earth with more advanced technology and people with powers called Gifts. There she immediately bumps into the mysterious Aven, who says she’s destined to help him. Alex doesn’t like this at all and is glad when friends Bear and Jordan come and “rescue” her from Aven. They take her to Akarnae, the academy for the Gifted. She is immediately enrolled, even though the headmaster is suspiciously gone and she happens to be the first person from our world, Freya, in thousands of years. Everything seems to be going just fine for Alex to be in an entirely different world. She has best friends, Jordan and Bear, and is in advanced classes. In fact the only thing that appears to be wrong is that she is in the Med-Ward almost weekly, but Aven lingers in her mind with the sense of danger and adventure.

Akarnae was filled with more twists and turns than the library itself, almost always leading to Alex ending up in the Med-Ward. I loved how the author personified the library and gave it such a mysterious personality. I also like the Gift Alex ended up having; it was fitting and will have much to play off in the next book. Noni also created very well rounded characters. Jordan was a personal favorite due to his wit and never-ending sarcasm and joking arrogance. And many characters were not who they seemed, including D.C. Noni’s language really made you feel like you were in Medora watching the plot unfold. The ending was great, it wrapped a lot up in a neat little bow, but it also left a fair amount unanswered. I cannot wait for the next book, Raelia.

Akarnae vaguely reminded me of The Last Dragon Cronicles by Chris D'Lacey. That book also featured an all knowing library and multiple worlds, but there was the added twist of clay dragons that came to life. In case one wants to read a similar book  that is equally epic.

A little blood and gore.
KEYWORDS

Read more reviews by Litpick Student Book Reviewer: Katiedid.Break
Recommend this book and review to your friends on Facebook