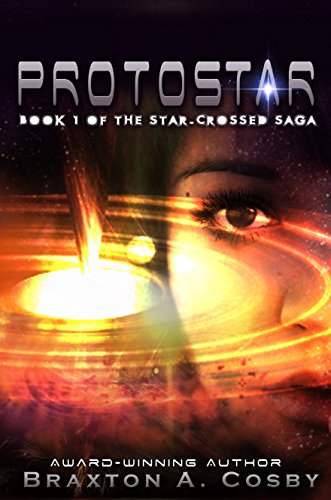 Protostar (The Star-Crossed Saga Book 1)
Braxton A. Cosby
When Prince William of the Torrian Alliance comes to Earth to assassinate the last Starchild Sydney, he must make an impossible choice between love and duty.The critically acclaimed, space opera romance, Sci-fi debut from award-winning author Braxton A. Cosby, The StarCrossed Saga is written in the spirit of The Hunger Games and the Divergent Series. Gold Medal Winner of Reader's Favorite and Literary Children's Classics Award for Sci-fi Young AdultWhat Would You Choose: Love or Duty? As the Torrian Alliance continues its age-old mission of hunting down Star-children, King Gregorio Derry reluctantly agrees to send his only son, William, to planet Earth on a mission to bring honor back to the Royal Family name. The target: Sydney, a young teenage girl, unaware of her alien heritage. When an unforeseen accident delays the assassination, William begins to realize a connection forming with Sydney and struggles to follow through with his orders. With the fear of Civil War imminent back home, William must make the ultimate choice between his irrevocable duty and love, sacrificing everything he believes. But as a hidden menace emerges to secure a vested interest, and impossible odds begin to mount against them, William and Sydney wonder if a connection between two starcrossed lovers is enough to save them from destruction.Book 1 of the award-winning StarCrossed Saga series, where teen romance blends with science fiction to open a whole new world of action, adventure and discovery! Rated one of the best space opera book series and sci fi alien romance.
3 Votes

William, the son of King Gregorio Derry, is being sent to earth to eliminate the dangerous Star-child. Sydney’s life is anything but exciting. However, when a strange but appealing man appears at her doorstep, she begins to hope that her life might become more exhilarating. Though William was sent to destroy Sydney, he begins to question his mission. The more time they spend together, the more they can’t deny that fate has led them to each other. Will the star-crossed lovers beat the odds?

What's this?
Protostar review by jotaf

Protostar is a book about seventeen-year-old Sydney who lives with her grandma in Madisonburg, Tennessee. Her life isn't very exciting and she hopes with all her heart that one day something interesting will happen. Finally, on her seventeenth birthday, her hopes are realized. An earthquake rocks the small town that she lives in. The earthquake alone isn't categorized as anything really exciting. But later that day, a mysterious stranger named William appears at the door of her house.

What's this?
Protostar review by CSt_SVHS

The Star-Crossed Saga: Protostar lives up to its name. This descriptively written prose leads a reader down a path that is synonymous with the original star crossed lovers Romeo and Juliet. This lovely scientific fiction is about William an alien who has one mission to restore honor to his family by killing a Star-Child. Enter the oh so beautiful Star-Child of earth, Sydney. In many milliseconds, hours and minutes they ended up find each other falling for the other. And William must choose between duty and love.