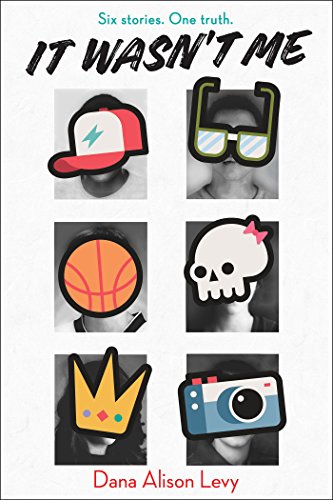 It Wasn't Me
Dana Alison Levy
THE BREAKFAST CLUB meets middle school with a prank twist in this hilarious and heartwarming story about six very different seventh graders who are forced to band together after a vandalism incident.When Theo's photography project is mysteriously vandalized at school there are five suspected students who all say "it wasn't me." Theo just wants to forget about the humiliating incident but his favorite teacher is determined to get to the bottom of it and has the six of them come into school over vacation to talk. She calls it "Justice Circle." The six students—the Nerd, the Princess, the Jock, the Screw Up, the Weirdo, and the Nobody—think of it as detention. AKA their worst nightmare. That is until they realize they might get along after all, despite their differences. But what is everyone hiding and will school ever be the same?*PW Best Books of 2018 *Winter 2018-2019 Kids' Indie Next List * JLG selection * Three starred reviews"Every reader will find some piece of themselves in Levy's sharp, humorous, and heartfelt novel. A twisty mystery with quirky, unforgettable characters and a positive message to boot."—JOHN DAVID ANDERSON, the critically acclaimed author of Ms. Bixby’s Last Day and Posted"What at first seems like a novel solely about bullying becomes a story about six kids who find their way to true friendship and fierce loyalty, and why restorative justice is worth the time and effort it takes." —Publishers Weekly, starred review "A timely, introspective whodunit with a lot of heart." —Kirkus Reviews, starred review "Levy writes in an easy style with laugh-out-loud humor, offering characters that slowly reveal deeper complexity." —School Library Journal, starred review
1 Vote

When Theo’s photos are ruined at his middle school, five other kids: Molly, Jax, Alice, Erik, and Andre are blamed for it. Everyone says that is wasn’t them. Theo’s favorite teacher suggests that they come to school over vacation week for detention or what she calls the “Justice Circle.”  She wants them to figure out who vandalized Theo’s photos.