The Journey of the Marked (The Miyran Heir Series #1) 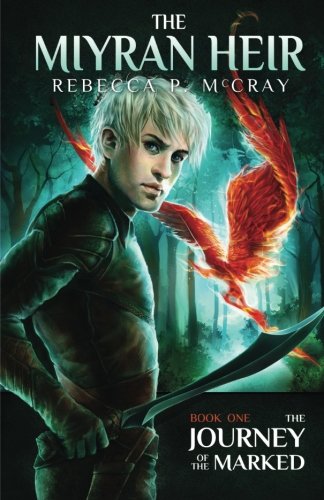 The Journey of the Marked (The Miyran Heir Series #1)
Rebecca P. McCray

Marked at age 16.Forced to leave home.You become the hunted.Could you survive?                                                                       "A gripping fantasy adventure. A FINALIST and highly recommended." -- The Wishing Shelf Awards"..Very adventurous, thrilling,and action-packed."-- Litpick.com"What a rich, complex world thisauthor has created!" -- author Sunshine SomervilleThe mark means honor. The mark invites death.On a distant planet, Eros thrives in the Human settlement he calls home. Raisedto follow his grandfather's noble footsteps, he studies the details of eachspecies that co-exist here. But when themark appears, he's called to fight, which changes his life forever. Forced to abandon his home, the mark makes him the hunted. He'sattacked the night he arrives in the city. A tough, streetfighter named Kenrya saves his life. When they join others on the samejourney, her cynical attitude drives a wedge between thegroup. Given the perils facing them, can they put aside their differences and trusteach other long enough to survive?Discover this epic adventure where an individual's unique abilities can change the course of the future.
3 Votes

Eros, Prizene, Tip, Azetan, and Kenrya have all received the mark on their 16th birthday. They are forced to leave their homes and family, for fear of endangering them with the enemies that relentlesly hunt the marked. They all meet one another and decide to travel to the training camp for the marked together. Each posses their own unique skills that help the group.

What's this?
The Journey of the Marked (The Miyran Heir Series #1) review by jotaf

The Miyran Heir: The Journey of the Marked is a book about five friends and their journey to become protectors.  These five friends are all from different species, who live on a planet called Zolei:  Eros, a male Human; Tip, a male Liput; Azetan, a male Plinte; Prizene, a female Krystic; and Kenrya, a female Arlian.  All of them wake up on their respective sixteenth birthdays discovering they have been marked.  The mark is a sign from Lady Anyamae that she has chosen them to become her warriors.  They are called to protect Lady Anyamae and her heir, the only two Miy

What's this?
The Journey of the Marked (The Miyran Heir Series #1) review by TrickyCrow

In The Journey of the Marked several people from different species must work together to get to a place of safety, before they are found and killed. They have to decide who are their friends and who are their enemies; a single mistake could cost them their lives. They are thrown into a world out of their depths. The man hunting them is in a high position of power that allows him to hunt them without reprecussions. He seeks to sell their world for its resources. As they journey through the dangers, they must figure out the pathways to saftey.