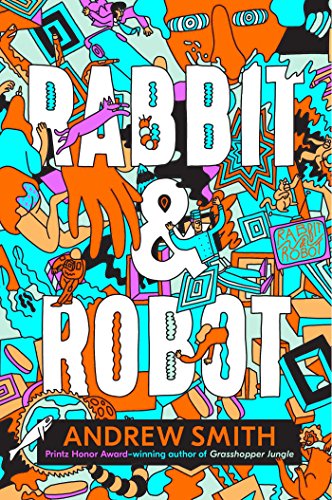 Rabbit & Robot
Andrew Smith
Told with Andrew Smith’s signature dark humor, Rabbit & Robot tells the story of Cager Messer, a boy who’s stranded on the Tennessee—his father’s lunar-cruise utopia—with insane robots.Cager has been transported to the Tennessee, a giant lunar-cruise ship orbiting the moon that his dad owns, by Billy and Rowan to help him shake his Woz addiction. Meanwhile, Earth, in the midst of thirty simultaneous wars, burns to ash beneath them. And as the robots on board become increasingly insane and cannibalistic, and the Earth becomes a toxic wasteland, the boys have to wonder if they’ll be stranded alone in space forever. In his new novel, Andrew Smith, Printz Honor author of Grasshopper Jungle, will make you laugh, cry, and consider what it really means to be human.
1 Vote

Cager Messer is a Woz-head also known as a drug addict. He is kidnapped by his caretaker Rowan and his best friend Billy and they take him to the Tennessee, which is a giant lunar ship that is orbiting the moon. During their stay on the Tennessee, Earth is destroyed due to the 30 plus wars that are happening concurrently. Cager and Billy are the last humans alive in the universe and they have millions of robots or "cogs" as company. The cogs eventually become insane and start eating each other due to the invasion of blue worms by Queen Dot.