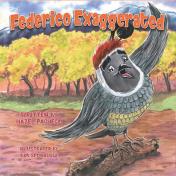 Federico enjoys exaggerating. Especially when it means all eyes are on him! One day his inflated story of his bravery on the Rio Grande is interrupted by the announcement of ripe hackberries. Left without an audience, Federico stomps off and accidentally stumbles onto a way to recapture his friends’ attention—well maybe. What he finds might teach him that truth can be incredible without exaggeration.

Federico likes to think of himself as a great storyteller, but his friends know that most of his stories are wildly exaggerated. One day Federico is telling his best friends the story of how he was in the middle of the great river the Rio Grande during a huge storm. However, once they hear that there are hackberries nearby, they rush off, leaving Fedrico's story unfinished. Angry that his closest friends had rushed off in hopes of finding hackberries instead of listening to his story, Federico stomped off in a random direction.

Federico Exaggerated is a classic tale of The Boy Who Cried Wolf but instead of a boy, the main character is a bird! This story will take readers on a Spanish and nature-filled journey near the Rio Grande with a covey of quail and one specific bird, Federico, who is charismatic and full of exciting stories. While Federico is telling his covey about a riveting story, one of the quail announces that berries have been spotted. Next thing Federico hears is a loud stampede of hungry birds and no one to listen to his story. While Federico trails behind the group, he finds something unbelievable!