X: A Novel review by vbobrocks 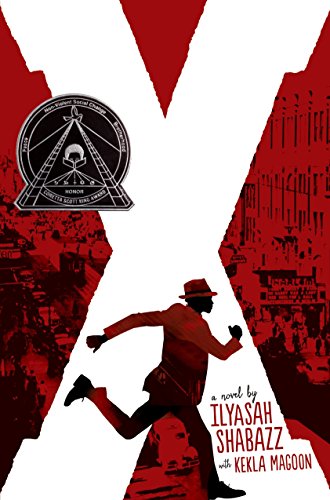 At age fifteen, Malcolm Little can’t leave tiny Lansing, Michigan for Boston fast enough.  Ever since his human rights activist father was killed when he was six, Malcolm, his seven siblings, and his mother have been struggling to make ends meet as an impoverished black family in a mostly white community.  More tragedy strikes when Mrs. Little is placed in a mental hospital and her children are torn apart to foster homes.  Needing an out, Malcolm moves to Boston to live with his half-sister; there he immerses himself in the nightlife and less-than-legal habits of the nearby suburb of Roxbury.  Dancing every night away and living on a marijuana-induced high, the teen tries to bury all memories of his past life and his father’s lessons.  Soon Roxbury isn’t enough and Malcolm is off to Harlem, where he lives for the hustle and the high.  But that life means always running, and eventually the law catches up.  Thrown into prison, cleaned up, and handed a book, Malcolm gets on the track to becoming the human rights activist we all know of today.

X: A Novel by Ilyasah Shabazz, daughter of Malcolm X, with Kekla Magoon was fascinating, inspiring, and, at the same time, heartwrenching.  The story chronicles Malcolm’s early life and teen years simultaneously and gives the reader insight to the many events that made him who he was.  The transformation from small-town boy to city slicker is one that is sure to keep readers cringing at Malcolm’s questionable decisions, but by the end of the novel, it’s clear that without his experiences, Malcolm wouldn’t have become who he did.  As for the writing, X was a smooth and gripping read, one that will be a hit with readers in junior high, or older for that matter, who are interested in Malcolm X, biographies, the ‘30s and ‘40s, or just want a quality read.

Use of some rough period language and some mature situations.
KEYWORDS