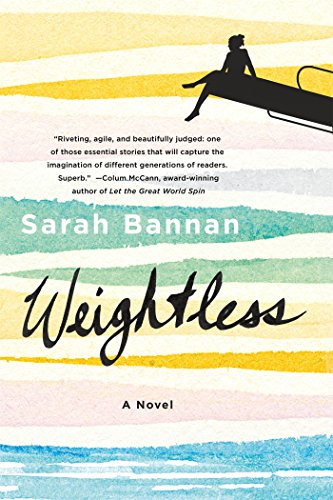 Weightless
by Sarah Bannan
Age Range - 12 and up
Genre - Fiction

The juniors at Adams High in Alabama are every bit as cliché and stereotyped as one would expect students in a southern high school to be. The sun is hot, the summer is ending, and the popularity contest is up and running. Carolyn Lessing, having just moved from New Jersey, is the new girl and is quickly becoming the new golden girl, making waves as she starts to usurp former popular girl Brooke. Brooke is your typical mean girl and refuses to stand by as sweet Carolyn takes her place and boyfriend, so she retaliates through social media, rumors and insults, wearing Carolyn down bit by bit until Carolyn is seen as a slut. Carolyn is kind through and through and never loses it until she tries to stand up for herself, but then Brooke takes things too far in one charged encounter in the school parking lot.

I thought the plot was good overall, but the book moved a lot slower than I would have liked. There would be a few sentences that would really pique your interest, and then another page of boring stuff before you found out more. If those pages of boredom had been extracted I think it would make a much more exciting novel. I liked that the narrator is not a person but a group of observers in the school, which I thought really captured the clique-oriented storyline. (i.e. "We went to the mall" instead of "I went to the mall".) I feel like there was a lot of "fluff' in the book- lots of words but they didn't really convey anything of substance. (A lot like Donald Trump, don't you think?) Besides that, the ending was pretty obvious halfway through the book, and I really wanted to jump to the ending to confirm my suspicions instead of reading the rest of the book.

Intimacy is implied several times and filmed on one occasion, there is a student who cuts his/herself and one character commits suicide.
KEYWORDS

Read more reviews by Litpick Student Book Reviewer: sakurafrost
Recommend this book and review to your friends on Facebook