Wednesdays in the Tower review by avolzer 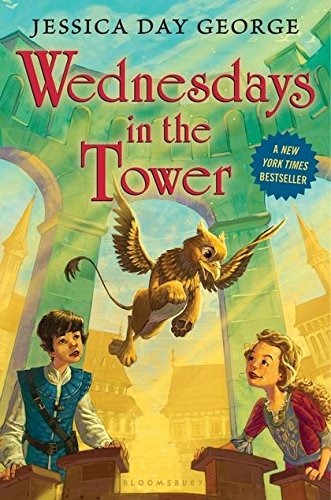 The magical Castle Glower starts acting strangely. It has always been magical, but it is using its magic strangely. It has always added and removed rooms, but now the rooms seem lived in. Princess Celie, who lives in the castle, is surprised to find a large egg in an unknown tower of Castle Glower. Celie hatches the egg and finds a highly unusual animal inside. The castle won’t let her tell anyone about her new pet except two others. For the first time, the royal family wonders where the new rooms come from. Is there another castle like it far away that exchanges rooms with their castle?

Wednesdays In The Tower is a sequel to Tuesdays At the Castle. It is not necessary to have read the first book, but it is very helpful. The development of the plot of this fantasy/mystery moved slowly, but it got more exciting as the book continued. The plot was interesting, and I found myself wondering what was going to happen. However, it was lacking an antagonist, or bad guy. There wasn’t really a problem or conflict. Be aware that it ends on a cliffhanger. This really disappointed me, as it was the most exciting part of the book. I’ll be looking for the next book!

Read more reviews by Litpick Student Book Reviewer: avolzer
Recommend this book and review to your friends on Facebook