The Watch That Ends the Night: Voices from the Tit... 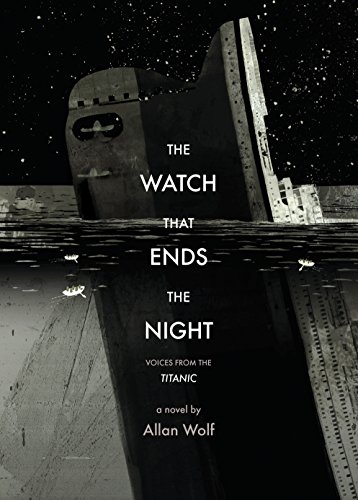 The Watch That Ends the Night: Voices from the Titanic
by Allan Wolf
Age Range - 12 and up
Genre - Historical Fiction

The Watch That Ends the Night:  Voices from the Titanic

April 14, 1912.  The RMS Titanic is floating about 1,400 miles out to sea in the mighty and unforgiving Atlantic Ocean, headed to America.  The Watch That Ends the Night by Allan Wolf is about  over two-thousand souls, completely unaware of the horror that is to befall them, are entreated on the doomed vessel, each who has their own hopes, dreams, and wishes—yet all who have the same fate.  One of the masses is a Lebanese refugee, who flees to America with her brother to escape the barbaric Turks that are destroying her home.  Yet another is a stoker, part of the Black Gang that makes the great ship tick, who carries a burden of guilt on his shoulders so large that it could sink the liner alone.   There is a junior officer, set on improving his rank, to a gambler, looking for fools and the greediness that follows them.  There is a millionaire, a lookout, a young dragon hunter, all with different agendas and backgrounds, yet, all  somehow tied together as they unknowingly look to the future that awaits them .  There is the captain, a man who vows to bring the crush of people to safety, and the shipbuilder, who was the mastermind behind the entire vessel, who made the great Titanic unsinkable.  And then is the fated iceberg, waiting, watching, readying itself for the souls on the great ship it will claim before the night is through.

“Silence fills the dark, and I know we have reached the spot where the Titanic foundered.  They are out there in there in the water.  The bodies.  Among the debris.  My name is John Snow.  You could say that my living is death.   I am the undertaker.  I have come for the bodies.”

I am really at a loss at how to describe this book.  It was stunning.  Amazing.  Heartbreaking.  Powerful.  It was all the same yet completely different.  This book was an emotional rollercoaster for me.   I’m usually an impassive reader, not really letting the words affect my emotions, but, somehow, this book broke that shell I built around myself.  I laughed with the first-class promenade and cried with the little child in the lifeboat that heard the endless moaning of the dying as they sank below the surface of the merciless ocean.  This novel was organized into stanzas, with a new character’s viewpoint at every page, which made it even more influential.  I was just so moved by this great piece of literature.  It changed me.  I felt like I was right there, felt like I could feel the terror of the passengers as the ship sank below the surface to its final resting place, felt the anguish of the few who made it to safety but lost their loved ones to the sea.  It made me realize how so many lives can be altered in just one moment, how many lives are already on the twisted path of fate.  There are a lot of characters in the novel, which can be confusing, but you get the hang of it by the middle of the story.  This book was wonderful and I would highly recommend to anybody searching for a good read.

“We could still make out the Titanic’s brightly lit outline......And then it was gone altogether.  Then the moans.  There was no one voice that stood out.  From that distance it was just a horrific roar.”

I would recommend this book for ages eight and up because it is quite a long book and a higher reading level is required.  This book has no profanity or any compromising situations.

Have you ever wondered what it would be like to be one of the doomed on the RMS Titanic?  The Watch That Ends the Night by Allan Wolf will give you just that!

No worries with this novel here! The content is clean and ready to be read!
KEYWORDS