Valley of Fires review by Jatay 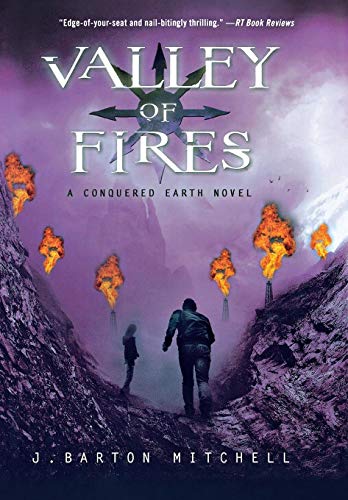 This is the third and final book in a series called Conquered Earth. One of the protagonists, Zoey, is captured by aliens, who operate as parasites inside machines. These aliens try to force Zoey to help them invade human bodies. Upon realizing the dangerous situation that has befallen their friend, Mira and Holt, the other main characters that are in love, have to work together to try to rescue Zoey before it's too late and the human population is taken over by aliens. During their journey, Mira and Holt get separated. Will the gang be able to thwart the evil aliens' plans?

This was a really fast-paced book with lots of action. In order to understand what's happening, I definitely advise reading the other books in the series. This was the only book I read in the series, and some parts were confusing. I really liked this book because there was never a dull moment, and there were lots of cliff-hangers. The only drawback was that the plot was sometimes unrealistic, for example when Mira and Holt had a perfectly planed escape and when they miraculously evaded certain death over and over. My favorite character was a daring girl named Ravan. She is not one of the main characters, but I like her because she is an awesome pirate.This is a great book for Sy-Fi and dystopian readers.

Mira and Holt are in love with each other and kiss several times. So it may not be appropriate for younger readers. Also, there was a lot of violence.
KEYWORDS

Read more reviews by this Litpick Book Reviewer: Jatay
Recommend this book and review to your friends on Facebook