The Turning review by R. Mae 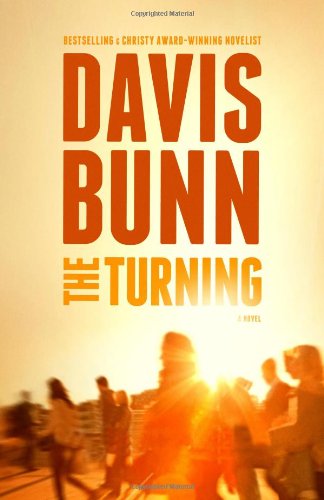 Hope is dead! Or at least that is what Trent is proclaiming to audiences all over the world. It's nothing personal, but the slogan is his chance for ultimate success and he will do whatever it takes to make that success real. John Jacobs and his group of friends have been called by God to oppose Trent. John and his friends believe that Jesus Christ brought the hope of eternal life and they want to share the message with the world. God works miracles everyday, and he can use anyone to spread the word.

The Turning was as addicting as it was inspiring. David Bunn's poetic and descriptive writing style flowed effortlessly. I was completely in awe of his characters, who seemed as real as the fact that you can't eat ice cream everyday without getting fat. And while the plot started out slow, it soon became a page turner.
David Bunn designed his cast of characters to be unique yet relatable. They each faced their own problems and learned their own lessons. The content was never bad, but it was definitely meant for a mature age group. Some of the concepts would be difficult for younger teens to understand.  The book tackled the difficult process of overcoming your past and reaching for God. It shed light on the relationship between God and the media. Also, David Bunn asked the question; would you do whatever it takes?
The plot did start out slow, but then you reach a point of no return and join the characters on an epic roller coaster ride. It was inspiring, creative, and thought provoking. I began reading the book without a real idea of what it was going to teach me, but in the end I realized that this book indentifys the questions that we are all afraid to ask. The story was full of debate and action in the sense of fighting for what you believe in. It wasn't a YA dystopian, where the characters solve problems by shooting each other. In The Turning they solved problems the way we do in real life, through words and the media.
Above all of those other things, the writing was the best. It was like David Bunn was weaving an exquisite tapestry right before my eyes. Colorful and insightful, the beautiful wording grabbed my attention and held it. I couldn't stop reading. I was transported to David Bunn's world.
So to finish, it was an absolutely beautiful book, with a realistic plot, identifiable characters, and gorgeous writing. I would recommend this book to mature teenagers who are Christians and non-Christians alike.
Rating:
4
Content Rating:

The story was about following God wherever he leads you.
KEYWORDS