Tour of the Merrimack review by farmerboy 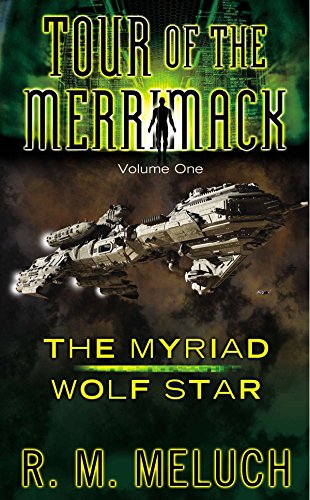 Tour of the Merrimack
by R. M. Meluch
Age Range - 12 and up
Genre - Adventure

The Roman Empire has reemerged as a powerful force determined to destroy the Teran Empire of Earth, but things are complicated when a strange and menacing presence appears at the edge of the galaxy, threatening to annihilate all life.  To combat it, an uneasy alliance between the two powers is formed, and the greatest warship of all, The Merrimack, is sent to discover how to destroy it.  Will the shaky alliance hold long enough to prevail?  Or is humanity doomed?

It definitely wasn’t the unusual writing-style.  Though I thought it needed to be refined a bit, I could appreciate its uniqueness, and could easily see others enjoying it as is.  The heavy use of implied subjects constituted an interesting and engaging technique.  Although short sentences were necessary for this, they were overused elsewhere, which made for an undue choppiness that detracted from the skillful use of implied subjects.

It wasn’t even the plot-line.  That was okay, except that it was like a bulldozer, stuck in quicksand, moving in first gear.  It was dramatic, potentially gripping and exciting, but so painfully, agonizingly S L O W . . .  and D R A W N    O U T . . .

Some of it was the character development, or the lack thereof.  To that end there were descriptive paragraphs when each character was introduced, along with occasional factual passages sprinkled throughout the book to fill in the blanks.  Without these I would have been completely lost.

Some of it was the dialogue.  That was almost funny when the author had the otherwise two-dimensional characters crack some “witty” yet cliché-ish and unreasonably terse banter.  Unfortunately, banter seemed to be the only purpose of dialogue in this book, since it contributed nothing towards developing the characters.  In addition, the lines struck me as being of the one-size-fits-all variety; it seemed as though they were factory-made and applied to each character at random.  Instead of using dialogue to help move the plot along, the author employed...

These appeared ad nauseum, and were the only reason the story went anywhere.  They kept my attention for about the first chapter, after which they became a melodramatic distraction from an otherwise tedious plot.  I would have been able to enjoy them if they had been used a little more sparingly and less like duct tape.  As it was, it seemed as though any time the author hit a snag in the plot, out would pop a “DRAMATIC ACTION SCENE!!!!!” to distract you from it.

In conclusion, I found the book to be choppy and draggy overall with certain points over-sensationalized.  The characters were flat and undeveloped to the point of being almost indistinguishable from one another.  Dialogue was poorly used.  I did, however, find the writing-style interesting.

There is violence in this book.
KEYWORDS

Read more reviews by Litpick Student Book Reviewer: farmerboy
Recommend this book and review to your friends on Facebook