There Will Come A Time review by crabby 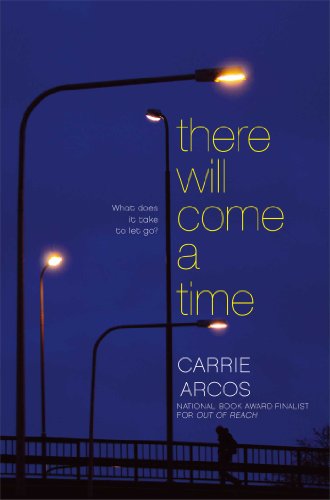 Before the accident, it was Mark and Grace. Eternal twins, bound together since birth. But one day a driver on a bridge makes the wrong move, and then, suddenly, it’s just Mark. Alone. Grace has been loved and mourned by many, but while the rest of the world seems to be moving on, Mark is suspended, caught between the realm of the living and the beckoning of the chasm beneath the bridge where his sister left him. His relationships are falling apart, and a dark, angry grief threatens to tear him apart from the inside. Precious fragments of Grace’s life seem to be fading all around him. So, when his sister’s best friend proposes that they complete Grace’s bucket list in order to honor her memory, Mark agrees. As he fulfills his sister’s final wishes, though, Mark must grapple with a task that’s not on the list, and it’s the hardest of them all: he must somehow come to terms with the unspeakable tragedy that has shattered his heart.

Mark’s narrative, while a tad clichéd at times, is surprisingly potent. The way he copes with his trauma is grippingly authentic and relatable; he is quite young, and he is still developing his own sense of self even as he tries to understand the sister he lost. Mark’s struggles with grief and guilt mingle realistically with the odd bits of happiness that crop up unexpectedly in his life, like his growing relationship with Grace’s best friend, Hanna, or his family telling stories around the Christmas tree. Mark’s healing process is never portrayed as black and white. It is infinitely messy and complicated, and this complexity makes the story and its characters incredibly genuine. The author manages to tackle a very heavy subject without becoming excessively dark or depressing. This novel has a lot to offer, and without a doubt, other readers will soon become as fond of Mark as I am.

While the story never gets too morbid, it is still about death, and it contains images of a violent car crash and the subsequent death of Mark's sister.
KEYWORDS

Read more reviews by Litpick Book Reviewer: crabby
Recommend this book and review to your friends on Facebook