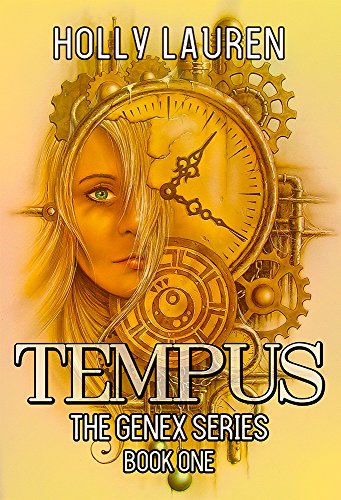 Tempus: The GenEx Saga
by Holly Lauren
Age Range - 12 and up
Genre - Fantasy

To the rest of the world, Chapel Ryan plays the sweet, ordinary, wholesome Southern belle. But from the novel’s very first line (“It had been years since Chapel Ryan’s last hallucination”) novelist Holly Lauren marks her protagonist as anything but unremarkable. Even ignoring her stereotype-busting love of classic literature (how many high school cheerleaders consider A Farewell to Arms a stress release?) and her dad’s tragic death fifteen years earlier, Chapel’s life feels far from ordinary. The only boys spicing up her Friday nights are Dickens and Fitzgerald, and, on occasion, Chapel freezes time. Or thinks she does, anyway; what Lauren portrays as a superpower, Chapel’s mom and therapist blame on recurring hallucinations. The tall, dark, and enigmatic Isaiah Halstead, however, might harbor the secret of Chapel’s power— not to mention a few secrets of his own. But as Zay and Chapel’s slow-burn romance ignites just enough to go down in flames, these secrets threaten to drive them apart.

First of all, let’s get one thing straight: from the opening hook to the messy, exhilarating final chapter, Tempus delighted me. Though Lauren’s humor could occasionally deteriorate from giggly teenage antics to corny bouts of forced comedy, I couldn’t help but smile through my groans. You could call Tempus lighthearted, even generic teen fluff, and you’d have a point; from the angelic blonde to the bad boy she falls for, Tempus’ plotline runs parallels that of most supernatural romance novels. You might consider it comfortingly familiar, or you might consider it formulaic escapism. Or you might, like me, consider it a little bit of both. Though a tangle of marginally related subplots slows the novel’s earlier chapters, Lauren whirls through Tempus’ electrifying climax fast enough to give you whiplash. So fast, in fact, several earlier subplots fade into the rush of pheromones and adrenaline.

Tempus defies just, you know, fundamental scientific laws while putting young adult lit’s tired, so-called “rules” on a pedestal. Love YA paranormal (because, despite the flimsy scientific explanation, I still consider this paranormal)? Then I’m all too certain you’ll adore Holly Lauren’s Tempus.