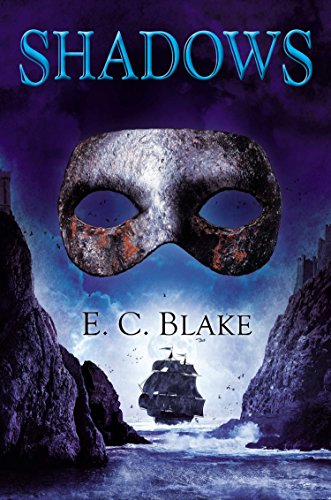 Shadows
by E.C. Blake
Age Range - 12 and up
Genre - Adventure

Shadows, by E. C. Blake, is a story about a teenage girl named Mara Holdfast. Mara is the daughter of the master maskmaker in Temita, of the country Aygrima. In Aygrima, all people over 15 must wear masks. These masks draw the people’s magic for the Autarch’s own gain. The masks also tell the Autarch if anyone had betrayed him. Mara’s mask, however, had broken on the day of her masking, which led to where she finds herself now, a member of the unmasked army, an army whose goal is to overthrow the tyrant Autarch, charged with the making of fake masks. The only problem, she doesn’t know what magic is involved in making the masks. Mara is a special girl though, she has the ability to see and use all types of magic, as well as feel and call upon magic in other bodies. This ability led her to find a crashed ship on the shores of the unmasked army’s stronghold, with only one survivor, named Chell. Chell claimed he was from a land across the sea, called Korellia. This was a shock to Mara, for she believed Aygrima was the only land. However, the matter of Chell was soon out of her head, for she had received word from her father, saying he would help her with the magic involved for the fake masks. What comes as a surprise to her however, is when Chell is in the group riding for Temita, saying that he has permission to accompany them on the mission. The so-called mission went smoothly at first, but while attempting to escape, Mara finds herself captured and marched before the Autarch. She barely escapes with her life by pledging fealty to him and by promising to use her magic to do his bidding. While imprisoned in the castle, her training in magic began. She quickly became a star student, but while all this was occurring, all she could think about was escape. One night, while she was sleeping, her salvation came. Chell walked into the room, a prisoner of the castle as well, but one with a plan for escape. The plan was finalized between the two of them, involving not only their escape, but the escape of Mara’s father. However, this all takes a downward turn when Mara’s father is discovered working against the Autarch. What will Mara do to save him? Will she jeopardize the safety of the unmasked army for her father’s life? Most importantly, how will she escape now that her father had been discovered and they were keeping a closer eye on her than ever? Are there any options left?

The book Shadows, by E. C. Blake was a fantastic story describing a power struggle between those without magic and those with it. Blake’s idea of magic was interesting. It intrigued me that magic was found in a black stone and the human using the magic has a “magic meter bar” letting them hold only so much power in their system. I also enjoyed how Blake described magic in colors, with most people only able to call upon certain colors. Also, the concept of Mara’s ability to pull magic from others was very cool and an awesome idea. E. C. Blake has opened up a doorway into a new style of magical fantasy. Another reason I loved this story was because of the instant connection I felt with the characters, none of the characters were perfect at all, giving me the ability to really relate with each and every one of the characters. To say the least, I am trembling in anticipation for the next book, Faces, to be released. I would recommend both Masks and Shadows to anyone who has a passion for reading or enjoys fantasy style stories.

There are moments of romance and at one point she tries to stick her hand down someone's pants.
KEYWORDS