The Secret of Goldenrod review by hawkreader10 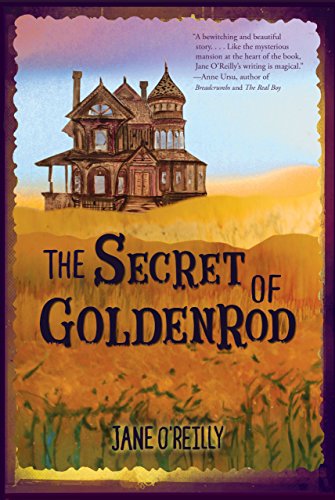 A “haunted” old mansion, a lonely girl, a magical 100-year-old talking doll...These elements come together to make "The Secret of Goldenrod," by Jane O'Reilly, a mysterious and heartwarming book. The main character, Trina, and her father have been moving around the U.S., renovating old houses, since her mother abandoned them when Trina was three. When Trina and her father move to a small, middle-of-nowhere town and tackle a dilapidated century old mansion named Goldenrod, Trina's life begins to change, though she doesn't know if it will get better or worse. At first, Trina thinks that the house is haunted and is scared by all the unexplained creaks and groans; but when she discovers a talking doll named Augustine in a secret room behind her mirror, she learns to get over her fears. With the help of Augustine and a “magical” ball, Trina figures out that the house is giving her clues to the secrets of its past.

"The Secret of Goldenrod" was a great book! I was so absorbed in Trina's story that I didn't want to put this book down. With the exception of the magical ball and talking doll, the plot felt very realistic. The detailed descriptions of the mansion painted a picture in my head and made me feel as if I was there. I really liked how the author used flashbacks to combine Trina's story with the story of the family who lived in Goldenrod a century before. I found "The Secret of Goldenrod" to be a very fast and entertaining read and would strongly recommend it to anyone from 5th grade through middle school.

This book had no religious, offensive, or mature content. I would recommend it for kids in late elementary school and kids in middle school
KEYWORDS