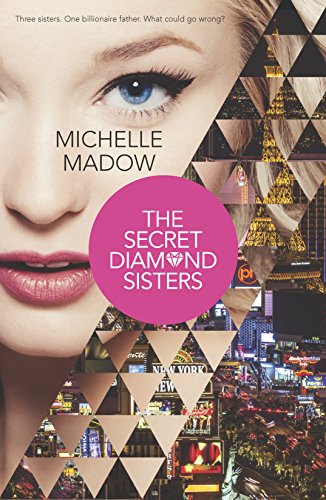 Michelle Madow's book The Secret Diamond Sisters: is about three sisters Payton, Courtney, and Savannah Diamond.  The three sisters grew up living with their mother.  They spent fifteen years trying to grab the attention of a father who they didn’t know if he even is alive.  Finally, they draw his attention.  Their mother, being an alcoholic, gets arrested for drunk driving.  Payton Courtney, and Savannah get released in to their grandma's custody. Their grandma cannot take care of the sisters, so she calls their father, Adrian Diamond.  Their father is a multi millionaire and owns many hotels in Vegas. The next day the girls are flown to Las Vegas to meet their father. When they arrive they are shown to their condo that happens to be in the penthouse of The Diamond Residences.  While the sisters are taking a tour of the building Savannah catches the eye of Damien.  The sisters don’t see their father much, because he is busy opening another hotel.  Each of the girls falls in love and gets their heart broken.

I felt as though the book was really good.  It was the kind of book that when I opened it I was transported to Vegas.  It was as though I was right along side Payton when Oliver broke her heart. I could feel her disappointment, and her anger towards him.  The one thing that really stood out to me was that there was never a dull moment in the book. I never said to myself, “Oh, this part is really boring”. No, I could not stop reading. Also, this book was jam packed with drama. You felt as though you were betrayed by your father, and you could sympathize with Savannah when she had to leave her best friend and move far away and you might not ever see her again.  I loved the format of this book. Madow wrote from different personalities. She wrote from Savannah, Courtney, Payton, Madison, and then she did a little blog every so often.  I could really hear the different voices, and how they were all their own person.  Her descriptions were amazing, there is no other way to say it--the descriptions were really good.  This book is the helpless romantic's dream.

Read more reviews by this Litpick Book Reviewer: GSracegirl
Recommend this book and review to your friends on Facebook