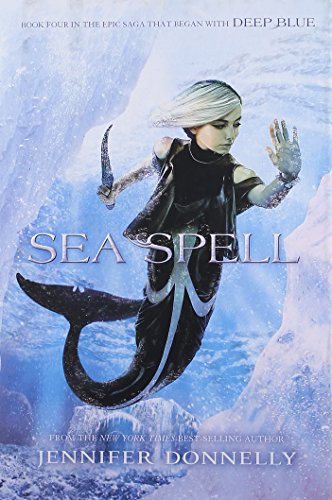 In the thrilling conclusion to the Waterfire series, Jennifer Donnelly delivers a climactic ending focusing on three of the main characters: Astrid, Serafina, and Ava. For readers new to the Waterfire series, these three girls are part of six heroine mermaids living in an ocean rich with mythology, magic and betrayal. Along with her friends, Serafina works to stop her treacherous uncle Vallerio from stealing her throne and achieving control over all of the mer realm. But Vallerio isn't the only villain the girls must worry about. A powerful mage named Orfeo must also be killed, and in order to stop him the six mermaids must collect six talismans.

Sea Spell picks up with Ava on the hunt in a swamp for her talisman while Astrid must go straight into the lion's jaws to collect hers: a black pearl held by Orfeo himself. Astrid must convince him that she, Orfeo's own descendent, is ready to join him while resisting the immense power he offers and stealing the black pearl. Meanwhile, Serafina and the other heroines (Ling, Neela and Becca) are in goblin territory preparing their army for war against Vallerio. Serafina, their general, has trouble deciding who to attack first when she is captured, making the decision for her army. Serafina's captor is another villain to be reckoned with. Lucia is Vallerio's daughter and, once upon a time, one of Serafina's ladies in waiting. But the tides have since turned, and Lucia now possesses the throne, determined to eliminate her only threat. With soldiers on Ava's tail, Serafina's life hanging by a thread, and Astrid seeing less to hate in Orfeo every day, time has become yet another enemy they need to defeat quickly.

I was really excited for Sea Spell, and I wasn't disappointed! There's a lot of danger coming at our heroines from all sides, but also a lot of hope. I love the complexity of Orfeo: he's not just a villain who kills merely to kill; he also has a purpose. He's always sought to bring his dead wife back from the underworld, not caring about the casualties he inflicts doing so. And instead of being cold and cruel, he comes across to Astrid as charming but powerful – fatherly, even. For her, Orfeo is the greatest enemy not only because of his malicious goals, but also because he has a strong chance of turning her over to his side. Besides the characters, the two big battles were well written, suspenseful, and heart stopping because nothing went as planned. Sea Spell was deliciously unpredictable except for a few scenes that I anticipated – the only thing I didn't like about the book. I highly recommend reading the three prequels before starting Sea Spell.

Read more reviews by this Litpick Book Reviewer: sakurafrost
Recommend this book and review to your friends on Facebook