The Revenge of Magic review by EmmaRaven 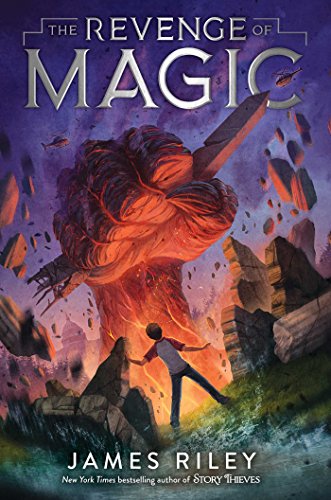 It’s been six months since Forsythe Fitzgerald lost his father. He was taken by a giant, unearthly creature that attacked Washington, DC. Now, Fort is confronted by a man named Dr. Opps, who offers to enroll him in a school that teaches its students magic through two strange books, The Magic of Recuperation and The Magic of Destruction. The two books, along with several others, were unearthed thirteen years ago, and only people born after their discovery have the ability to read their pages. Eager to seek revenge on the creature that abducted his dad, Fort accepts Dr. Opps’s offer. But as his lessons at the Oppenheimer School progress, it becomes apparent that something is amiss. Teachers and fellow students think that Fort will destroy the entire school, and he begins to see memories of expelled student Sierra and her peculiar powers. And it all has connections to a race of ancient and powerful creatures -- the same ones that caused the attack on DC. Fort, along with the Destruction student, Rachel; the Healing student, Jia; and the Clairvoyant Cyrus must uncover the secrets hidden within the school before their teachers realize what they know. As the fate of humanity hangs in the balance, they can either save the only known defense against the creatures…or provide their sure passage into the human world.

As a Harry Potter fan, I absolutely love these kinds of normal-kid-finds-out-he-has-magic-powers-and-saves-the-world-with-them stories. In this particular one, there’s plenty of action, plenty of foreshadowing, plenty of formidable foes bent on world domination, and, of course, plenty of magic. But all these fantasy elements are carefully and seamlessly woven together, making them feel real and believable. The Oppenheimer School is a school of magic -- a modern, American Hogwarts -- and yet it still has the same kinds of social drama as a regular school (but with plenty of fireballs and the like). Fort is bullied throughout the book due to the fact that he’s presumably weaker at magic than the other students, and anyone who’s been treated as an outsider can relate to that. The story hooks you in at several climactic points, and it’s really hard to put it down sometimes because you keep wondering, what will happen next? With plot twists, a dash of dry humor, and excitement that will keep your adrenaline pumping, The Revenge of Magic will leave you eagerly waiting for the series’ next installment.

There is mild violence and intense peril.
KEYWORDS