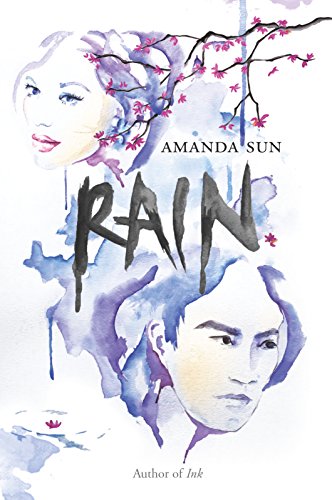 Rain
by Amanda Sun
Age Range - 12 and up
Genre - Adventure

After moving to Japan, Katie Green expected life to be more tranquil, quiet and simple. Instead, she meets Japanese legends and is kidnapped by the fearsome Yakuza. So naturally, after all this, timid Katie turns down the offer to escape Japan and return to the Americas. Though this time she’s prepared; she has her legendary boyfriend Tomo, mysterious ally Jun and developing powers of her own. Katie feels like she can take on anything. Then the power that fuels Katie, Jun and Tomo revolts,causing all three to face their deepest fears: their pasts.

Just who is the most dangerous? Unstable Tomo? Conniving Jun? Or innocent little Katie?

Only when you know your past can you find your future… and Katie Green is surrounded by fright.

Ms Amanda Sun has the same super powers as her characters in “Rain”, because her storytelling swept me up and took me over!

“Rain” was stunning! Ms Sun crafted an intriguing story, a satisfying sequel and a determined troupe of characters.

I thoroughly enjoyed the book. Sun’s characters came off the page and had me reacting with them. I was embarrassed when Katie acted obviously like a foreigner, I was suspicious when Jun came to the scene and curious when “Nii-chan” revealed a new part to the Legend.

Tomo and Katie’s chemistry flew off of the pages—they just clicked, and I loved it.  The heat and love between the two is so strong, that even I believe they could take on the world. But it won’t be easy as Sun’s plot thickens, leaving me impatiently waiting for the next book. The book did seem to rush a bit, so I had to reread it, but I enjoyed every minute of it.

On a sidenote, the paintings in the book were very charming; I thought they were a delicate touch.

I give this book four stars out of five for it's intriguing plot and beautiful characters.

This book was very close to receiving a five out of five from me; I only relented because at times, the book seemed to rush too quickly through certain plot points—I wish they had a bit more time.

Tomo and Katie do have a relationship and there are some suggestive conversations, but nothing scandalous. In addition, there are some powerful fight sequences throughout the book.
KEYWORDS

Read more reviews by Litpick Student Book Reviewer: ReesaOnFire
Recommend this book and review to your friends on Facebook