Out of the Cold review by ReesaOnFire 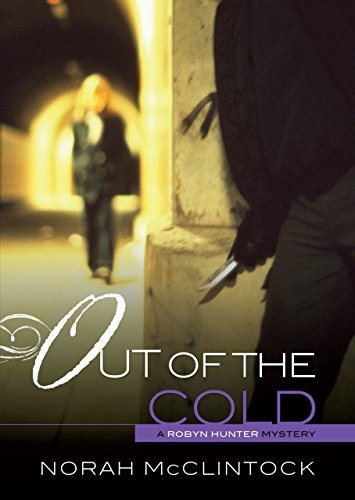 Robyn Hunter is just a regular girl; she has divorced parents, great friends and a steady—scratch that-- missing boyfriend and knack for getting caught up in mysteries.  After volunteering at a local homeless shelter, Robyn finds Mr. Duffy,a local, dead ....and it’s all her fault. Robyn promises to find out more about Mr. Duffy, to apologize to those who knew him, but as Robyn finds out more, she finds herself facing a dangerous situation. Was Mr. Duffy really just a poor crazy homeless man? Or did Mr. Duffy’s true identity harbor darker secrets?

Every person has a story; some stories are more interesting than others. In McClinton’s Out of the Cold, Mr. Duffy’s story is unraveled by Robyn Hunter, a random stranger.
Set in different locations, such as the park, homeless shelter, and the streets, Out of the Cold follows Robyn, Ben, and their friends as they try to find the identity of Mr. Duffy. Each character helps with the plan, whether it's Ben using his connections, Morgan with her people skills, or Robyn looking for the next clue. McClintock did a great job of showing the teamwork between the characters of Out of the Cold. McClintock did a good job of portraying the story through Robyn, but in her other characters, like Ben, she gives a wider perspective and opinion of the story.  Her side characters, like Ben, are easy to relate to. For example, Ben, a regular volunteer, calls Robyn a “Two-four, as in twenty-four hours” (McClintock, 23) when she enters the shelter. Ben had made this assumption based on what she had looked like. This is relateable because many people treat others a certain way based on their judgment of first impressions. McClintock had other examples throughout the book that drew parallels to the world today, especially on the amount of poverty.
I think that Robyn's background was well explained for a 'middle of the series' book. I wasnt confused about Robyn or her family or her 'boyfriend' because McClintock left a wonderful set of dots for the reader to connect if they wanted to know about it.  I especially liked how the clues came together in the end of both her (Robyn's) private life and mystery.
Overall, I enjoyed this book for its refreshing mystery and the thrill of figuring out the truth. It was excellent.
I would recommend this book for anyone who enjoys modern mysteries or a “modern Nancy Drew”. It was a clean book with no unnecessary content or  over-romance.
Rating:
4
Content Rating: