Olive and the Backstage Ghost review by Laura335 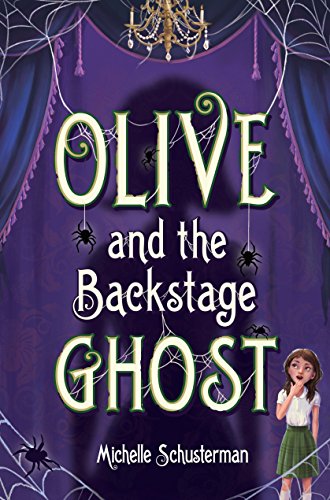 Olive Preiss loves to perform onstage and even signs up for a summer theater camp. There’s only one problem: her mother. Mrs. Preiss used to be a famous stage actress, but ever since Olive’s father died, she has been extra critical of her daughter. It seems like Olive can’t do anything right in her mother’s eyes. This makes her freeze up whenever she performs in front of her mom, which is exactly what happens during her theater camp audition.

As a result, Olive runs out of the building and through town, trying to escape from her humiliation. There, she runs into an old theater with a sign that says “Maudeville” on it. Inside, she sings her chosen audition song on the old stage in what she thinks is an empty auditorium. But a woman named Maude reveals herself after Olive’s performance and praises her singing. She invites Olive to join Maudeville, a talent act featuring a mime, an acrobat, a ventriloquist, and others, but it is Olive who will be the main act.

Olive decides to join Maudeville, keeping it a secret from her mother. But Maudeville isn’t just any theater. It’s full of ghosts and looks different to different people at different times. Olive is too focused on the show to notice at first, but slowly, the theater starts to reveal its true self to her, and its true self isn’t good. Will Olive realize it in time, or will she be trapped in Maudeville as another one of the performing dead?

Olive and the Backstage Ghost is a much darker story than I expected but in a good way (and not just because of the ghost story surrounding it). I felt bad for Olive. She’s sad and lonely. The only person she has in her life is her mother who constantly makes her feel bad about herself, and sometimes, she’s even violent. So, I didn’t blame Olive for running away from theater camp. I wanted her to get away.

At first, Maudeville is exactly as Olive always hoped it would be to perform in a show. Everyone is nice to her, and she fits in with all of the other talented, outcast performers. She also meets some ghosts who turn out to be friendly, and you begin to think this isn’t your typical scary ghost story.

It gets a little slow in the middle as the performers rehearse for their show, Eidola. Without being able to hear Olive singing or know the song that she is singing, it’s hard to tell if she really is a great singer or if her new friends are just being nice to her. It’s also hard to visualize the other acts that the performers put on, but you can tell that it’s unlike any other.

Things pick up as Olive begins to learn more about her friends, especially a young girl named Julianna and her brother, Felix. Felix is always standing outside the theater but refuses to come in. He doesn’t like the theater and warns Olive not to go in there, but Olive can’t see why until the theater starts to deteriorate little by little before her eyes. She also starts to uncover secrets about the theater and its ghosts and learns that not all of them are friendly.

The ending is action-packed, scary, and intense. It had me on the edge of my seat. Things wrap up very quickly at the end, and I would have liked there to have been more. But it leaves you with just enough to feel satisfied, like the grand finale at a fireworks show.

I would recommend this book to anyone who loves theater, reading mysteries, and is a fan of ghost stories. The language may be a little too advanced and scary for young readers, but older kids looking for a thrill will love it.

There are some scary moments and descriptions of horrific deaths that have occurred in the past.
KEYWORDS

Read more reviews by this Litpick Book Reviewer: Laura335
Recommend this book and review to your friends on Facebook